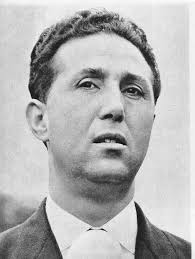 Ahmed Ben Bella was radicalised by the Algerian massacres of May 8 1945. This is a key date. It marked the end of the Second World War in Europe and was celebrated with victory marches all over Algeria.

Ben Bella had volunteered to fight the Germans in 1939. Serving in the French Moroccan 5th regiment as part of the French expeditionary army he was decorated by De Gaulle after the April 1944 battle of Monte Cassino.

On 7 March 1944 De Gaulle’s French National Liberation Committee had agreed that 62,000 Muslim Algerian soldiers should be given French citizenship and allowed to vote. On 8 May 1945 the French colonial authorities agreed that marches could go ahead, but on condition that only French flags were waved.

At Sétif, a young man carrying an Algerian flag was shot dead by a policeman. The demonstrators then turned on the police and local Europeans. Gunfire takes place at Guelma and Kherrata and reprisals supported by De Gaulle then take place over the following two weeks. By the end of May 1945 100 European-origin people and somewhere between 3,000 and 30,000 Algerians were dead.

Ben Bella then joined Messali Hadj’s Parti du peuple algérien and in 1947 the Organisation spéciale, the armed section of Hadj’s nationalist movement. In May 1950 he was arrested in Algiers and sentenced to seven years imprisonment for a bank robbery.

In April 1952 Ben Bella escaped from his Algerian prison and got to Marseille and then Paris, where he was hidden in an attic in the Rue Rochechouart. By 1953 he had got to the recently established Egyptian republic via Switzerland. He was then responsible for supplying arms to the FLN, flying frequently from Egypt to Italy, Spain and Morocco.

Twice he narrowly escaped bombs planted by the French Secret Service. Finally, on 22 October 1956, the French air force forced a regular Air Atlas-Air Maroc airliner carrying Ben Bella and four other FLN leaders flying from Morocco to Tunisia to divert to Algiers. In Morocco anti-French protests led to the deaths of 60 Europeans.

Ben Bella and the four other political leaders of the FLN were then taken to Paris and jailed in the La Santé prison for the two and a half year. While he was there several FLN fighters were guillotined on the prison’s scaffold.

Elected president of Algeria in 1963, Ben Bella made Algeria a global centre for Third World socialism. He experimented in self-managed cooperative businesses and promoted revolutionary movements.

Ben Bella was overthrown in June 1965 by his defence minister, Houari Boumédiène. Held a prisoner until 1980 he then left Algeria and lived in Switzerland from 1983 to 1990. Back in Algeria his new political party was banned in 1997.