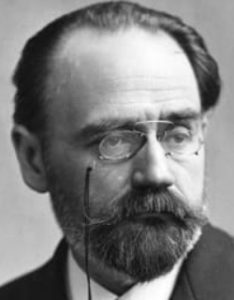 In 1898 Émile Zola, the pre-eminent 19th century social realist novelist, helped change the course of French history when he took up the cause of Captain Dreyfus, the Jewish army officer framed for treason.

From that moment onwards the republicans divided between those on the left who were internationalist and opposed racism and sought to improve the conditions of the vast majority of French people, and those on the political right who sided with the monarchists and Bonapartists and unconditionally supported the army and ‘strong government’.

Unlike most significant left figures in French history, Zola’s magnificent literary output followed by his premature death meant he has three plaques to him around Paris as well as an avenue named after him.

One plaque confirms his place of birth on the fourth floor of 10 Rue St Joseph, even though the family moved away when he was three years old.

Most Parisians rented their homes throughout the 19th and 20th centuries. Like them, Zola moved around a great deal when he first arrived in Paris to study for a Bac diploma in science (following in his father’s footsteps), staying primarily in the cheap Latin Quarter.

In 1858 to 1859, Zola lived first at 63 Rue Monsieur le Prince and then moved a short distance to 241 Rue St Jacques. After failing to get a Bac in science he gets a job as a clerc on the docks for two months before moving again in 1860 to 35 Rue St Victor. Evicted from there for non-payment of his rent his next move was to 4 Rue Rollin and then to 11 Rue Soufflot – all within a short distance of each other.

On March 1 1862 Zola starts a job at the Hachette bookshop thanks to an offer by its owner, Louis, and on October 31 1862 is naturalised French.

He is then living at what is now 7 Impasse Royer-Collard. Still employed at the bookshop, after a short stay with his mother at 5 Rue des Feuillantines, he then moves back to Rue St Jacques, this time to No. 278. This is where he was living in 1864 when his first novel was published, Contes à Ninon (Stories from Ninon).

In late 1864 Zola started a relationship with Éléonore-Alexandrine Meley, a seamstress also called Gabrielle, whom he married in 1870. The couple first lived together in 1866 in a sixth floor room with a view of the Luxembourg Garden from the terrace of 10 Rue de Vaugirard.

On 12 January 1898 Zola wrote ‘j’acccuse‘, a letter to the French President, Felix Faure, at his marital home since 1889 at 21 Rue de Bruxelles. He then took it to the offices of the ‘Aurore’ newspaper edited by Georges Clemenceau at 144 Rue Montmartre, now remembered by a plaque. It was published the following day.

Zola died of carbon monoxide poisoning from an alleged faulty heater in September 1902.