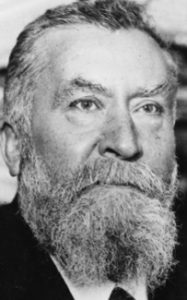 Jean Jaurès, a socialist from a French Protestant family of doctors, might have saved hundreds of thousands of lives by getting the French government to pull back from entering the First World War. But he was assassinated on 31 July 1914, three days before war was declared. Without his determined internationalism the other Socialist and trade union leaders collapsed into the ‘Holy Union’ against Germany.

In 1902 Jaurès was one of the founders of the French Socialist Party. In 1904 he set up the socialist daily paper, L’Humanité, that he edited until two bullets were fired into his back while he was having supper in the café on the corner of the Rue du Croissant and the Rue Montmartre, just up the street from its editorial office.

His body was taken back to his wife that evening, at 96bis Villa de la Tour, where they had lived since 1899.

In 1905 had been the principal mover behind the formation of the French Section of Workers’ International (SFIO) – the common origins of today’s French Socialist and Communist Parties.

Jaurès was opposed to armies used for offensive wars and believed the best defence was a people’s militia.

Two weeks before he was murdered, the SFIO’s emergency congress called for a general strike to stop the war and preserve peace. He believed that war could be prevented if a general strike took place in France and was followed by similar action in Germany, Britain and Austria.

Five days before his murder Jaurès told a meeting in Lyon that ‘War is brought by capitalism, like the clouds bring storms’. Jaurès moved a motion of censure against the Radical government for provoking war by sending a minister to Russia.

‘On the verge of war, if a general put Jaurès against a wall and gave him the lead he’s missing in his brain, wouldn’t you say he was doing his basic duty?’

This was not the first time Jaurès had been publicly vilified. He had attracted a barrelfull of vitriol in the Dreyfus Affair that split France for a decade from 1895. Alfred Dreyfus was a Jewish army officer who was falsely charged with giving intelligence to the Germans. He was court-martialed and sentenced to transportation for life to a prison island in 1894.

On one side was a massive coalition of the supporters of law and order, the French army (right or wrong), French nationalists and anti-semites (in a Catholic country where priests with considerable influence commonly preached that the Jewish people was partly responsible for Christ’s crucifixion). On the other were a handful of campaigners, mainly socialists and left republicans skeptical of the army and France’s imperial and militaristic ambitions.

In 1898 postcards showing Jaurès as a wild-eyed red drunken revolutionary did the rounds.

He himself had taken a few years before he was convinced by Émile Zola and others of Dreyfus’ total innocence, but once persuaded, Jaurès played a big part in getting Dreyfus freed. In 1897 he was physically assaulted in the National Assembly for denouncing the travesty of justice.

In 1898 he became a leading contributor to the radical republican newspaper, La Petite République at 111 Rue Reaumur. He soon added the adjective Socialiste to its title. From then until he founded l’Humanité in 1904 it was the main socialist newspaper. It was in its pages that he detailed the proof of Dreyfus’ innocence.

Walking from where Jaurès lived near the Trocadero to the murder scene at the Café à la Chope du Croissant on the rue du Montmartre on a summer’s day takes 45 minutes. Jaurès himself will have usually gone by the new metro or by a horse-pulled bus.

On 31 July 1914, however, he had gone there direct from the National Assembly, where he had failed to persuade the Republican ministers to step back from war. He was going to work on an article for L’Humanité that would call on the French working class to stop it instead. So he decided to have a bite to eat before going to the paper’s office at 16 rue du Croissant.

What happened to the appropriately-named Raoul Villain, the 29-year-old nationalist who murdered Jaurès and silenced the last person capable of resisting the descent into war?

Villain, a member of the Youth Friends of Alsace-Lorraine (under German control since 1871) ran away from the scene but was stopped and arrested. He immediately told the police he was proud of what he had done and was imprisoned awaiting trial. Throughout the war he repeatedly asked for his trial to be postponed. It finally opened on March 24 1919, four months after the war was ‘won’.

The judge told him: ‘Villain, you’re a patriot. You just didn’t think about the consequences of your act’.  Five days later, by 11 votes to 1 the patriotic jury acquitted him. One juror said: ‘If Jaurès, the opponent of the war, had been around, France would not have been able to win the war’.

The judge then ordered Jaurès’ widow to pay the costs of the trial. Three weeks later, on April 6 1919, a 100,000-strong socialist protest demonstration down the Avenue Henri Martin where Jaurès’ widow lived at no 72 , was attacked by the police, and two demonstrators killed.

Villain fled France, and finally experienced the ultimate, ironic fate. He was living in Ibiza when the Spanish Civil War broke out in 1936. Franco bombed the town and Villain was shot as a spy by Spanish anarchists without their knowing his real crime against humanity.