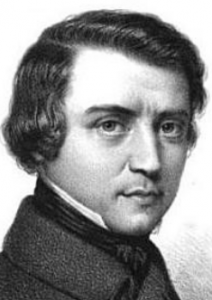 A key figure in early French socialism, Louis Blanc was influenced by utopian communists, but argued the importance of the state. He led the Labour Commission from February to May 1848 and then lived in exile until 1870.

Louis Blanc opposed ‘murderous competition’ and stood for a new organisation of work based on workers’ associations.

Educated thanks to a royal grant in his early 20s he got a job as a private tutor for an industrialist and became interested in working conditions in the factories around industrial Arras in Northern France.

Moving to Paris in late 1834 he started to work for a pro-democracy newspaper and became active in left circles. In 1838 he called for the creation of a national railway company rather than dozens of private businesses. He became known as a republican/democrat propagandist.

As editor in chief of the Revue du Progrès politique, social et littéraire  from 1839 to 1842 he developed many of the socialist ideas with which he became identified: universal suffrage, a single representative body, strong central control over all collective areas of society, a just distribution of wealth between capitalists and their workers.

It was in the Progress Review that he first articulated the ideas behind his 1839 pamphlet, ‘The Organisation of Work‘. This became the blueprint for most French socialist schools of thought for the rest of the century. Essentially it proposed that the State fund the creation of workers’ cooperatives, whose profits would be returned to a central fund that would redistribute them in social security and reinvest them in new cooperatives.

Between 1841 and 1848 he worked with Pierre Leroux and George Sand on the Revue indépendante. Also, over 1841 to 1844 he published five volumes of a history of the first ten years of the Louis-Philippe monarchy, and then in 1847 a history of the French revolution. This history, highly sympathetic to Robespierre, made Blanc a big attraction in the 1847 pro-democracy Banquets campaign whose banning led in February 1848 to the overthrow of Louis-Philippe.

From 1842 he lived at 2 Rue Taitbout, shortly before he joined the reform group producing the radical daily, La Reforme from Alexandre Ledru-Rollin’s office in the Rue des Bourdonnais.

In 1844 Blanc was one of the many French leftists, including Proudhon and Cabet, involved in discussions with Karl Marx and other German exiles at the office of the fortnightly Vorwarts (Forward!) newspaper in the Rue des Moulins.

On February 24 1848 Blanc was back at Ledru-Rollin’s office putting up left names to be placed on the Provisional Government. The next day he welcomed a march on the Hotel de Ville demanding that the provisional government guarantee work for the unemployed.

On February 26 Blanc was one of the founders, with Albert, François Arago and Ledru-Rollin and others, of the leftist Rights of Man club.

On March 1 1848 Blanc and Albert presided over the first meeting of the Workers’ Commission at the Luxembourg Palace, with other left reformers such as André Savary, Constantin Pecqueur and Victor Considerant, Their meetings, unlike any others before the Constituent Assembly began to meet, were open to the press, allowing their discussions to reach a wide audience.

The Commission introduced two major reforms within days. It initiated an unemployment scheme whereby workers who attended ‘national workshops’ would be allocated work and be paid; and at the same time it funded ‘social workshops’ in the form of cooperatives supplying uniforms for the national guard and saddling and harnesses for the army. The latter, production cooperatives, were profitable and survived until 1850. The former were closed in June 1848 leading to the bloody June days insurrection of working-class Paris.

Elected to the Constituent Assembly on April 23 1848, Blanc was removed from the government. His last report to the new Assembly unsuccessfully proposed that the Workers’ Commission should be replaced by a Ministry of Labour.

It was at Rue Taitbout that Blanc and other leftists met and decided not to participate in the following day’s protest demonstration that ended up occupying the Hotel de Ville and unsuccessfully demanding a change in government.

Blanc had been the honorary president of the Socialist Workers’ Club that met at the Valentino Dance Hall in the Rue St Honore. It was dissolved after the failure of the occupation of the National Assembly on May 15 1848 at the Hotel de Ville when Barbès, Blanqui, the worker Albert, Leroux and François-Vincent Raspail, they tried to change the membership of the government.

Accused of supporting the 15 May protest, even though he had not participated, in August the Assembly voted by 504 to 22 to put him on trial. He defended himself stressing his commitment to socialism as the logical next step of the republican’s tryptique, Freedom, Equality and Fraternity. Without hanging around for the verdict he left Paris on a false passport, via Belgium, for England.

After his return from exile to France at the end of the Second Empire on September 4 1870 Blanc was elected top of the list as Deputy for the Seine on February 8 1871. He voted against Thiers taking power and against peace with the Prussians. But he was also opposed to the Paris municipality, the shortlived Commune, assuming it had a right to govern the whole country, and made repeated unsuccessful appeals for negotiation and reconciliation between the Commune and the Versailles government.

At the end of the Commune, his furniture, papers and library were destroyed in the fire.

He then moved to live above the Café Tortoni at 21 Rue Visconti. He was on the extreme left of the National Assembly with virtually no wider influence. On February 20 1876 he was elected deputy for both the 5th and the 13th arrondissements in Paris and at Saint-Denis. In 1881 he was re-elected by the 5th arrondissement.

On March 3 1879 Blanc (in the National Assembly) and Victor Hugo (in the Senate) successfully passed a law providing an ‘Amnesty-Pardon’ to around 3,500 Communards jailed or exiled after the 1871 Paris Commune.

Louis Blanc died on December 6 1882 and was buried in Père Lachaise next to his art critic younger brother Charles who had died in January. A huge funeral procession followed his coffin to the cemetery.