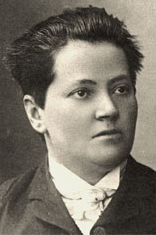 On Saturday, December 9 2017, the Library of Parisian History reopened after an 11-month refurbishment in the stunning 16th century Lamoignon Hotel. One of the displays at the packed open day showed this torn copy of the front page of the first issue of La Suffragiste.  It was edited by Madeleine Pelletier from 1907 to 1914.

In 1904 Madeleine Pelletier was the first woman to be allowed to work as a psychiatric ‘docteur’ inside France’s mental health asylums after she had forced a change in the law. But when we visited the site of her medical practice in the interwar years just south of Gare Montparnasse, the plaque finally agreed to by the co-owners of the building at 80–82 rue de Gergovie in 2011 says, ‘Doctoresse’ instead.

Pelletier did however sign herself ‘doctoresse’ once before in an article denouncing false internments. Ironically, she then died an internee herself, inside the Perray-Vaucluse asylum on December 29 1939 aged 65. She was completely sane, held as a feminist political prisoner. She was placed there by a judge who decided to shut her up rather than allow her trial to continue on a charge of carrying out an abortion on a 13-year-old raped by the child’s brother.

Pelletier had campaigned for the previous 35 years for women’s contraception and the right to an abortion. Half paralysed after a stroke in 1937 she was clearly not guilty as charged (abortion was only finally legalized in France in 1974).

Pelletier began writing for La Fronde (The wind of change/Insurrection) that Marguerite Durand had launched in 1897.

In 1907 she launched the Suffragiste after attending the first Women’s Socialist International Conference in Stuttgart in August. She was part of an 8-strong delegation from the Paris SFIO.  Out of a total of 58 delegates from 15 countries she was one of the 11 who voted against Klara Zetkin’s formulation that ‘the struggle for voting rights for women workers is not separate from the class struggle’.

For Zetkin, the main task was to integrate women into all aspects of the class struggle, and to bring socialist ideas to the attention of working-class women. Zetkin argued that while social democrats should support women’s franchise, ‘we are not so politically uneducated as to demand that the socialist parties of every country, in every struggle for electoral reform and in all circumstances make the demand for voting rights for women the cornerstone, the deciding factor in their struggle.’


Pelletier argued ‘Certainly, with socialism a woman in poverty would gain materially, she would no longer be hungry and cold. But the yoke of the male would still extend over everything. Besides giving love and motherhood, there would still be no place for women in society. It is therefore essential that the emancipation of women be realized today; this struggle will thus present the society of tomorrow with a fait accompli.’

In 1905, Pelletier joined the SFIO, the French Socialist Party, to press the feminist case. In 1906 she became Secretary of the Women’s Solidarity feminist group. She was one of the leading feminists in France before the First World War. In the March 1908 Paris local elections Pelletier and two other leading feminists overturned ballot boxes in the 4th arrondissement and broke windows at another polling station. In June 1908 she travelled to London to participate in the half a million strong ‘Women’s Sunday’ Hyde Park demonstration organized by Womens’ Politicial and Social Union.

In 1910 the SFIO agreed to nominate Pelletier and some other women illegally as a parliamentary candidate (although in an unwinnable seat). She got 340 votes (4%), more than the previous male Socialist candidate had done.

One of two surviving (out of 12) children of a royalist vegetable stall-holder mother, her cab-driving republican father’s stroke when she was four that left him in a wheelchair, gave her someone to argue with. The building, 38, rue des Petits Carreaux in the working-class 2nd arrondissement, where she lived was so badly built it fell down in the mid-1930s (and is now the site of the amazing vertical green wall pictured here).

Pelletier left school at 12 and after work escaped to local libraries and feminist and anarchist groups, meeting Louise Michel. Her reading gave her a life-time’s feminist, communist and libertarian principles. She took the name Madeleine instead of her militantly Catholic’s mother’s name, Anne.

At 22 and 23 Pelletier sat and passed the baccalauréat (A-levels). In 1899, when there were just 29 French women out of 4,500 medical students, she won a City of Paris grant to study medicine. After a feminist-led newspaper campaign in 1904 the law was changed so she could work inside the Paris Villejuif asylum. In 1906 she became France’s first qualified woman psychiatric doctor.

She cut her hair short and dressed like a man.

In 1914 she was one of the rare French socialists to denounce the First World War as imperialist, and volunteered to work for the Red Cross, on condition she would be allowed to provide health care to both French and Germans without distinction.

In 1920 Pelletier attended the Tours Conference of the SFIO where she supported the formation of the French Communist Party, which included equality of the sexes in its programme. In July 1921 she travelled illegally to Russia to attend the Second International Congress of Women Communists.

By 1926 she had broken with the Communist Party, arguing consistently that communism must include freedom. In 1932 Pelletier joined a left group called ‘Party of Proletarian Unity’. In 1936 she applauded the appointment of the first women ministers in the Popular Front government of Leon Blum.

She lived and worked in the 1920s and early 1930s in the Rue de Gergovie, but then moved out to Gif-sur-Yvette to the South of Paris where she learned to drive a car and continued to campaign against fascism, for the right to abortion, contraception and women’s right to vote, writing novels, plays, and a biography.  Many of these were for the L’Idee Libre, an anarchist journal whose April 1926 front page is pictured here.