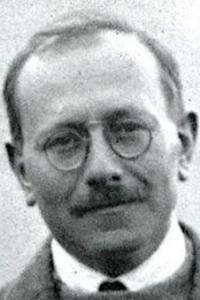 The son of a Jewish university lecturer in Roman history, Marc Bloch’s teenage years were spent under the shadow of the Dreyfus Affair. He did his higher secondary school studies at the prestigious lycée Louis-le-Grand in the rue St Jacques. Leaving top of the class he was accepted at the elite École normale supérieure in the Rue d’Ulm which he entered in 1904.

After two grants allowed him to study in Germany he taught at lycées in Montpellier and Amiens before being mobilised in 1914. Initially an infantry sergeant he was wounded but ended the war as a captain in intelligence with one of the 35,000 Legion of Honour decorations given for courage on the battlefield during the war as well as the Croix de Guerre.

In 1919 Bloch married Simonne Vidal. with whom he had six children, and was posted to the new university of Strasbourg. In 1929 Bloch, Lucien Febvre and André Piganiol founded the multidisciplinary historical journal Annales d’Histoire économique et sociale. This journal believed in ‘total history’, breaking with the silo mentality that had prevailed up to that point.

In 1936 Bloch secured a post at the Sorbonne, becoming Professor of Economic and Social History in 1938. From 1936 to 1939, Bloch lived in a flat above the Lutetia swimming pool at 17 Rue de Sèvres.

In 1939, aged 53, he volunteered to rejoin the army. He was appointed to undertake the mobiisation of soldiers in Strasboug, and then to work on logistics. He was evacuated from Dunkirk on May 31 1940, but immediately returned to France via Plymouth and Cherboug. When the Germans reached Normandy he made his way to rejoin his family at Le Bourg-d’Hem, where they had a holiday home.

France’s leading 20th century historian was then excluded from his Paris post In October 1940 as a Jew. The Germans requisitioned his flat and sent his library of books back to Germany under the law allowing them to do what they wanted with the Jewish property.

The Vichy Government’s new Secretary of State for Education, however, was an historian who had been taught by Boch’s father. Jérôme Carcopino decided to reappoint Bloch as a Professor ‘for exceptional scientific services to the French state’ and to post him to Strasbourg University in exile in Clermont-Ferrand. He therefore declined a job offer from the New School of Social Research in New York and moved to Clermont-Ferrand with his unwell wife and their children.

Early in 1941 Bloch was allowed to relocate to the University of Montpellier, where many other university lecturers were also now based. Bloch joined the intellectual resistance group that produced the underground papers Liberté and Combat.

With the occupation by the Germans of the southern zone on November 9 1942, Bloch moved into clandestinity. He quickly became a leading figure in the Lyon area Franc-Tireur movement. In preparation for the liberation in 1943 he was given the job of editing the resistance Political Notebooks.

Denounced by an informer he was arrested on March 8 1944 and then brutally tortured by Klaus Barbie among others without revealing any information. He was executed by the Germans with 29 other resistance fighters shortly after 8 pm in the evening of 16 June 1944. The youngest shot was 19, Bloch, aged 59, was the eldest.

In 1997 a small gap between redeveloped housing in a poor part of Paris was called ‘Place Marc Bloch’ to remember his name.