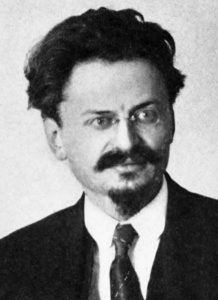 Trotsky (the alias Lev Davidovitch Bronstein adopted to replace his earlier one of Pero in 1902) first stayed in Paris for a few months in the Autumn of 1902 after his solo escape from Siberia on his way to London. This was where he first met the Ukrainian Natalya Sedova, three years his junior.

He had been exiled to Siberia with Alexandra Sokolovskaïa (1872-1938), whom he married in a Moscow jail in 1899 when he was 20 and she 27. Already a Marxist she was one of the leaders of the Southern Russian Workers’ Trade Union that Trotsky had worked with. In Siberia the couple had two daughters, Zinaida Volkova (1901-1933) and Nina Nevelson (1902-1928).

In 1902, the Russians living in Paris associated with Iskra, the occasional paper of the Russian Social Democratic Labour Party, used to meet in the flat rented by Natalya Sedova at 4 Rue Lalande, near the Montparnasse Cemetery in the 14th arrondissement.

In Autumn 1902 the 21-year-old Natalya was asked to find a flat for an incoming revolutionary from Vienna, whom she had not met and whose name she was not told.

That revolutionary was Lev Bronstein. And they spent many hours walking Paris together before living together in 1903.

Lenin was also lecturing in Paris in 1902-3 accompanied by Nadezhda Krupskaya. In December 1902 the two couples went to see a show at the Comic Opera in Rue Favart. Lenin lent Trotsky a pair of shoes for the occasion since his were not presentable. Trotsky later complained they were too small:

I suffered awfully, and Lenin kept making fun of me the whole time.

Shortly afterwards, Leon and Natalya moved to London to support and then break with Lenin, and then reunite and then…

In 1905, before leaving for Russia and the Revolution taking place there, Trotksy was again briefly in Paris and is supposed to have visited the Café Le Dôme  at 108 Boulevard du Montparnasse.

The couple’s first son, Lev, was born while Trotsky was in jail in Moscow after the 1905 Russian Revolution. Escaping from exile to Siberia in 1907 Trotsky spent seven years in Austria and Germany, with perhaps a visit to Paris to meet Lenin in 1910.

This meeting took place at a Montmartre artists’ café where it is suggested they also may encountered the poet Guillaume Apollinaire.

The police informer who ran the Café de la Rotonde on the other side of the Boulevard also reported Lenin and Trotksy meeting with other Russian exiles there in 1910.

Trotsky was back in Paris from 1914 until his deportation in 1916. He was then
editing an internationalist socialist paper, ‘Our Word’ (Nashe Slovo) whose editorial offices were at 17 rue des Feuillantines. He also met many French anti-war activists such as Pierre Monatte at the revolutionary syndicalist bookshop located at 96 Quai de Jemmapes.

While in Paris this time he lived for several months at the Hotel d’Odessa at 28 Rue d’Odessa which now has the only semi-public plaque to Trotsky in Paris (next to the reception) and met Diego Rivera at the nearby Café de la Rotonde.

He then moved to 23 Rue de l’Amiral Mouchez and invited Natalya and his family to join him before moving to 27 Rue Oudry. The French police used to spy on Trotsky from the cafe Le Petit Bar at 57 Boulevard St Marcel.

On March 31 1916 Trotsky was arrested at Rue Oudry and taken by the police to the Spanish border, from where he was deported to the US. He got back to Russia in May 1917… and despite being white-washed out of the official Soviet history under Stalin, became, arguably, the second most important leader of the Russian Revolution after Lenin until his death in 1924.

The next time Trotsky was in Paris was 1933. This was the year that began with Hitler being nominated Chancellor of Germany. It also saw Trotsky’s eldest daughter, Zina, both of whose two husbands would soon be executed in Stalin’s Great Purges, committing suicide in Berlin aged 32. His youngest daughter, Nina, had already died from tuberculosis in Russia in 1928.

On December 30 1933, while in hiding at Simone Weil‘s parents’ third-floor flat in the Rue Auguste Comte Trotsky made the absurdly unrealistic decision to launch a ‘Fourth International’ – because, logically he considered, something had to be done to mobilise against the fascists. It was not because there were real people out there wanting or waiting for his leadership.

Both of Trotsky and Natalia’s two sons were killed on Stalin’s orders. Their youngest son, Sergei, was killed in 1937 in Russia. His first wife, Alexandra Sokolovskaïa, was executed in 1938 during Stalin’s Great Purges.

Natalia and Leon’s eldest son, Lev Sedov, was advised (by one of Stalin’s agents acting as his secretary) to go to a private Clinique Mirabeau at 7, rue Narcisse-Diaz for appendicitis. Shortly after the operation, carried out by an incompetent doctor and an anaesthetist who also worked for Stalin, he died of complications in 1938.

After breaking the heart-rending news to Natalya, Trotsky wrote: ‘Everything that was young in us died with our son’. Lev had been looking after Zinaida’s son, Vsevolod (Sieva), who, accompanied by Alfred and Marguerite Rosmer, then joined his grandfather in Mexico in 1939, aged 13. Sieva was present at one failed assassination attempt on his grandfather. Trotsky was finally assassinated there in 1940.

Natalya, who broke with the Fourth International in 1951 because its leadership insisted on still seeing Stalin’s Russia as a ‘workers’ state’, lived on until 1962 in France. She died in Corbeil-Essonnes, part of what was then the municipal Communist ‘red belt’ just South-East of Paris. The last Communist mayor there was defeated by the reactionary industrialist Dassault in 1995.

In October 2016, walking south between the two halves of the Montparnasse Cemetery towards 46 rue Gassendi, where in 1902 the 20-year-old Natalya had found the 27-year-old Trotsky a Paris room to rent, and they became lovers, I counted six homeless tent shelters attached to the trees and cemetery wall. It was rather sad to see after so many people had fought and died and loved over the previous hundred years for a world that wouldn’t treat people out like that.