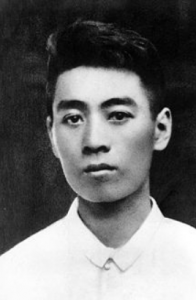 Zhou Enlai, born to a wealthy Mandarin family had a modern, liberal education and went to university in Japan for a year in 1917. He came to France after spending the first six months of 1920 in prison for his involvement in a nationalist demonstration.

Zhou left China in November 1920 as one of the 1,200 ‘work-study’ Chinese students that the nationalist Li Shizeng, based in France, organised in the early 1920s within his Franco-Chinese cultural programme.

After experiencing work at the Say sugar refinery at 123 – 127 boulevard Vincent Auriol (formerly the boulevard de la Gare), he then spent two weeks in the Renault Billancourt factory.

Zhou with his family wealth behind him, unlike the other Chinese students did not have to work. So he moved quickly into full-time political activity. He joined the Communist Party soon after its foundation, early in 1921. At this time he first met Ho Chi Minh.

In February/March 1922 Zhou moved to Berlin, which was also the centre of the Western European secretariat of the Communist International.

From 1923 Zhou employed the 17-year-old Deng Xiaoping (1904-1997) to type out the stencils and run the duplicating machine he had installed in Paris. Deng eventually recovered from being purged by Mao to opening China to foreign investment and the global market in the late 1970s and 1980s.

In the summer of 1924 Zhou returned to China with a reputation of being an excellent organiser, and became leader of the Shanghai insurrection of 1927. From 1935 he became one of Mao’s most reliable supporters in the leadership of the Chinese Communist Party, and was Prime Minister of China from 1950 to 1975.