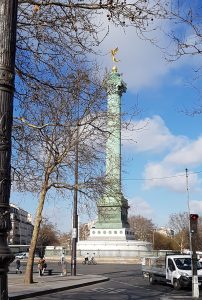 Called after the ‘small fort’ originally built next to the St Antoine gate into Paris and then turned into a stone fort in 1370, the Bastille soon became a six tower fortress with thick walls and a moat. By 1553 it was an eight-tower fortress with a copper-bottomed moat. In the 17th century it was turned into the prison that was eventually taken by Paris’ newly-formed militia and local people on July 14 1789.

Demolition began almost immediately. Voltaire’s coffin was symbolically brought there on its way to the Pantheon on July 11 1791.

In 1792 it was decided to turn it into a huge square, the Place Antoine. The Marseillais volunteer national guardsmen arrived there singing the song that became the national anthem on July 30 1792.

From June 9 to June 14 1794 the guillotine was installed in the ruins of the fort. But after killing 73 people in less than three days the local shopkeepers complained so much (about the smell and those who had come to watch) that it was moved to what is now called the Place de la Nation, and was then the Square of the Overthrown Crown.

After the 1830 Revolution the new King Louis-Philippe decided to erect a column in the middle of the square to honour the 615 victims of the ‘Trois Glorieuses‘ Revolution – the Three Glory Days. It was inaugurated in 1840.

On April 13 1834 barricades went up in the square as local workers rioted in support of the silk workers’ insurrection in Lyon.

On February 24 1848 Louis-Philippe’s throne was taken from the Tuileries Palace and ceremoniously burnt at the foot of the July column. Three days later the 196 dead in the February Revolution were buried in the crypt beneath the column, and the Second Republic was officially proclaimed there.

On June 24 1848, when the new right-wing government announced the dissolution of the National Workshops, the Bastille square was entirely circled by barricades, and a red flag placed in the hands of Dumont’s 1836 allegorical statue le Génie de la Liberté flew briefly from the top of the July Column to accompany the flame of freedom and the broken chains of despotism.

A red flag flew again on top of the column on February 24 1871, when 14 battalions of the National Guard marched by in a commemoration of the 1848 revolution. The government’s attempt to replace the flag by the Tricolour on February 26 and March 9 1871 both failed.

During the 1871 Paris Commune three local sections of the International Workingmen’s Association used to meet in the Cour Damoye at No. 12.

The Communards fought hard to defend the symbol of revolutionary liberty, but were eventually overrun by the Versaillais. During the bloody week of May 1871 nearly all were killed in the fighting or shot afterwards.

The Place de la Bastille became the symbol of left and republican resistance.

The first Parisian demonstration of Communards after the suppression of the Commune took place at the Bastille square on May 9 1880.

On July 14 1935 a demonstration that brought together both Socialists and Communists marched from the Bastille to Vincennes. This was called under the name of ‘People Together’ (Rassemblement populaire) that became the Popular Front that won the 1936 parliamentary elections.

Since 1991 the Marche de les Fiertes have usually begun or ended at the Place de la Bastille. In the 21st century they have usually attracted at least half a million people. There were certainly about that number when Marian and I watched for hours as the marchers went by.