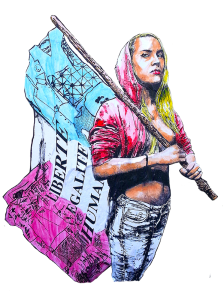 Left in Paris has been conceived, written and designed by Steve Jefferys and John Houston. Ian Birchall helped with some of the biographies. Steve’s photo (above) of a wall stencil near the Place de la République at the time of the Nuit Debout 2016 protest against neo-liberalism with a woman demanding Liberté, Égalité, Humanité pretty much sums up where we’re coming from.

Left in Paris (LiP) aims to provide an accessible guide to English-language visitors to Paris who want to know a little more about the people and places near them and the ideas that have contributed so much to France and to the world-wide struggles for a better world.

Steve’s first visit to Paris in 1955 was to visit his Dad who had just moved there permanently. After working regularly at Grenoble University from 1988 to 1992 and later research into trade unions in France, Steve published a book about France called Liberté, Égalité and Fraternité at Work: Changing French Employment Relations and Management in 2003. The Paris walks referred to were made possible by Steve inheriting his father’s flat in 1996.

John is a graphic artist and editor who worked for many years on the Guardian newspaper.

The selection of individuals included in this version of LiP has been made using two heuristic measures:

We have determined quite specific chronological limits to Left in Paris.  It doesn’t locate or provide biographies of individuals who are still alive, nor does it do so for those whose principal contributions date before 1830. This second restriction is partly shaped by the huge changes in Parisian topography from the 1840s to the 1870s, and partly by the existence of very many accounts in English of the French Revolution, 1789-1793, and the availability in Paris of excellent English-language revolutionary walks that deal with that period.

The French-language sources used to identify the locations and biographies of the men and women are many but the www.parisrevolutionnaire.com,  www.alain-rustenholz.net and the http://maitron-en-ligne.univ-paris1.fr websites have been particularly useful. We also provide links where they exist to the English language version of Wikipedia for additional material on the people we have selected. The two-volume Histoire des gauches en France covering the 19th and 20th centuries and edited by Jean-Jacques Becker and Gilles Candar is a fascinating collection of chronological and thematic discussions.

Translated superbly into English by David Fernbach, Eric Hazan’s A Walk through Paris: A Radical Exploration (WTP), A History of the Barricade (HOB) and The Invention of Paris: a History in Footsteps (IOP) are quoted in places. David Harvey’s Paris, Capital of Modernity is another invaluable inspiration.

The pictures used come from a very wide variety of sources. Most of the street pictures were taken by Steve; some are found on the websites referred to above or on Google streetview. The pictures of individuals and historical events have been found on a wide variety of French and English websites. If we have inadvertently broken any copyright in reusing them we apologise and will publish the details of the copyright holder or take them down if the owner prefers.

If you have suggestions of people and places that are missing, or additions, amendments and comments please email us at contactus@leftinparis.org