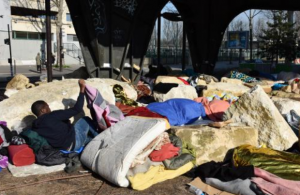 The photograph above shows the huge boulders placed under the La Chapelle bridge to deter migrants from sleeping there in February 2017. A collective of stone masons then moved the blocks sufficiently to allow sleeping spaces between them. All in the last months of the Hollande ‘socialist’ presidency. The camp was still being used and regularly evacuated under Macron in 2019.

1962 was the year France lost its last major colonial war. This was a key material and emotional turning point that unlocked modern France without removing either its right-wing nationalist or its left-wing social justice historical inheritances.

Both inheritances are still present as LeftinParis is being written. So this overview sketches a continuing story who end is still being struggled over.

In 1962 De Gaulle organised two referendums. The first on April 8 endorsed the Evian agreements, ending the Algerian War with 91% voting yes. The second, on October 28, introducing the election of the president by universal suffrage was carried by 62% voting yes.

De Gaulle’s Bonapartism was endorsed in the first Presidential election in 1965. He received 55.2 percent in the second round compared to Mitterrand’s 44.8.

These results were mirrored In the Paris 1965 municipal elections, the first in the capital to take place over two rounds. The Gaullist UNR (L’Union pour la nouvelle République) party won 27 seats and its allies another 12. There were 13 centrists elected and on the Left, 25 Communists, 9 Socialists, 2 from the ‘new left’, the PSU (Parti socialiste unifié), and 2 Radicals.

But De Gaulle’s absolutist time was running out. De Gaulle’s new governing alliance was not just between the right-wing generals, the senior civil service administrators and technocratic modernisers. It also embraced a significant part of the traditional Catholic conservative right. Thus while initially receiving broad support as a way of ending the chaos of Fourth Republic politics, it was increasingly experienced as a mechanism for freezing French social relations at the very moment when economic growth was threatening to burst them apart.

The 1967 National Assembly elections saw the Communist Party taking 6 of the 31 parliamentary seats in Paris, with the Socialists taking just one and the Union Progressiste, an alliance of left-socialists close to the PCF, also winning one.

In 1968 the cork blew off again, triggered by the vicious militarised police response to student demonstrators.

May 1968 involved a massive challenge to De Gaulle and the bureaucratic, conservative and aloof Gaullist regime. Anger came particularly from students and younger workers, the sign that the first post-Second World War generation born and raised in an era of full employment and job security had reached maturity.

Like their equivalents elsewhere in much of Western Europe, the new generation of largely middle class university students clashed with administrators used to dealing only with the children of the elite. In the factories and offices, experiencing near full employment for the first time, the new generation of more educated young workers clashed with the authoritarianism and arrogance of their managers.

What made a big difference in France, taking its revolt further than elsewhere in Europe, was the combination of the spark created by the state-absolutist repression of student demonstrators with the presence of a discourse of class conflict that harked back to the achievements under the 1936 Popular Front.

At its peak some nine million workers were on strike and hundreds of thousands of ‘new’ manual and white-collar workers participated actively in workplace occupations and street demonstrations.

While some on the Left considered the strikes could have led to a socialist revolution, the employers and government backed down. On May 27 they conceded a 35% increase in the minimum wage and what amounted to a 10% wage rise for most workers.

De Gaulle then dissolved the National Assembly and subsequently won an overwhelming majority in the ‘preserve law and order’ election of June 30 1968. In Paris the Gaullist party, the UDR, won 28 of the 31 National Assembly seats, with three being taken by other right-wing parties.

While nothing structural in terms of administrative power had changed, everything intangible had. Workers gained enormously in confidence. The Communist Party, the left socialists and the Trotskyist, Maoist and anarchist left groups all grew significantly in the aftermath of ’68.

In 1969 De Gaulle resigned after losing a referendum he did not have to call. He was succeeded by his prime minister, Georges Pompidou, who died in 1974. The more neo-liberal Valéry Giscard d’Estaing then narrowly beat François Mitterrand by less than 2% in the second round of that year’s election.

The Union of the Left‘s Common Programme – bringing the Communists and Socialists into an alliance from 1972 to 1977 – began to make headway. In the 1973 National Assembly elections, the Communist Party regained the seats it had lost in Paris in 1968 and also took two more to achieve a total 8 out of the 31 seats.

The 1970s and 1980s brought in huge social welfare reforms under both right and left governments. French inequality declined significantly.

Trade union membership in the 1970s averaged one million more than it had in the 1960s.

In 1977 for the first time since the Paris Commune, Paris was able to elect a mayor and a municipal council with power rather than be governed directly by a prefect. Still divided between the left-leaning Eastern manual workers’ areas and the rightist West, the large conservative majority elected Jacques Chirac as its mayor. He had been Giscard d’Estaing’s first prime minister from 1974 to 1976 and stood in Paris as the highest profile job he could win and hold while waiting for a chance to stand for President.

The Communist Party pulled out of the Left Union in 1977, and as a result the Socialists took seats from it in the 1978 National Assembly elections: the Socialists secured two deputies to the PCF’s four.

By 1981 it was Mitterrand’s turn to beat Giscard d’Estaing by over 3.5%. Three months later the National Assembly elections saw the Socialists route the Communists in Paris. Not a single PCF deputy was elected compared to 12 Socialists. This was the beginnings of the recapture of Paris for the Left that continued through the next three decades.

Mitterrand served two terms until dying of cancer in 1995 shortly before the end of his second term of office.

When in the autumn of 1995 President Chirac‘s first government tried to take away the protected pensions of railway workers and others in the public sector a mass strike movement was unleashed., eventually forcing the Juppe government to do a u-turn.

It was not just trade unions who felt empowered by the evidence that direct action through strikes and political demonstrations could influence government policies. According to police estimates some 6.25 million people participated in political street demonstrations in Paris alone between 1993 and 1999.

In 2002 around a million marched on May 1 calling upon voters to reject the Front National fascist candidate Jean-Marie Le Pen and to vote for Chirac in the second round of that year’s presidential election.

Most on the left held their noses and voted back in the clearly corrupt Gaullist Chirac. He got 82% of the vote. After his second term as president, another financially dubious but significantly much further to the neo-liberal right politician, Nicolas Sarkozy, was elected to succeed him. He won 53% in the second ballot to a leading Socialist woman, Segolene Royal.

In 2012 Sarkozy, who had largely failed in converting the French voters to accepting his neo-liberal agenda, was in turn defeated by Royal’s former partner, Francois Hollande. The colourless secretary ‘fixer’ of the Socialist Party secured just over 51% of the vote in an election whose result demonstrated disquiet with the corruption and flamboyance of Sarkozy rather than confidence about the incoming Socialist.

Hollande failed dreadfully as President, being persuaded to attack the trade unions and promote new attempts to cut public sector workers’ pensions, as if this would somehow restore the French economy to some previous glory. He also made a young banker his minister of finance, and it was this person of no fixed political abode, Emmanuel Macron, who was elected by just 66% of the vote against Marine Le Pen in May 2017.

Hollande did not stand for a second term in office. The Socialist Party vote in Paris collapsed. It was left with just one deputy in the National Assembly compared to the ten out of 18 who had been elected in 2012. Since 2002 presidential elections and National Assembly ballots have taken place at the same time.

Macron’s brand new political party, En Marche (LREM – The Republic on the move), took six of the Socialist Party’s 10 Parisian seats in the National Assembly. One of the others was taken by the further left Jean-Luc Mélenchon’s La France Insoumise (Untamed France – LFI). One other went directly over to the still neo-Gaullist right-wing Republicans (LR), and one was captured by the centrist ModDems (Democratic Movement). The Greens lost both of their National Assembly seats.