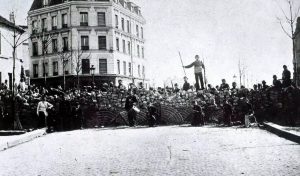 If Left thought and action didn’t originate in Paris it was certainly influenced by it.

Why? Keeping a centralised and absolutist tiny elite stranglehold over France from the late-16th to the last quarter of the 19th century was like shaking a bottle of champagne until the cork blows off.

Absolutism’s political survival under the Bourbons, their Orléans cousin, and the two Napoleonic Empires until 1870 largely blocked mechanisms that might enable gradual social change to reflect and smooth France’s economic and technological evolution.

Absolutism created a particularly self-pitying, aggressive and nasty capitalist class and an indomitable working class, sections of which had an exceptional readiness to both resist capitalist dehumanisation and to struggle for freedom.

Enlightenment France was not just modern ideas in the field of science. It also saw Voltaire (1694-1778) publish Freedom of thought in 1763 and Republican Ideas in 1765. Nearly the whole Parisian population joined the celebratory procession taking his remains to the Panthéon in 1791. Paris, with about 600,000 inhabitants, was then the second-largest city in Europe after London.

Jean-Jacques Rousseau (1712-1778), a citizen of the Geneva Republic who had lived in Paris for several years, published Discourse on the Origin and Basis of Inequality Among Men in 1755, and On the Social Contract or Principles of Political Rights in 1762.

Rousseau was highly thought of by members of the club that started meeting in the canteen of the Jacobin monastery in the Rue Saint-Honoré in October 1789. From 1792 the club was called the Société des Jacobins, amis de la liberté et de l’égalité (Society of the Jacobins, Friends of Liberty and Equality).

The Jacobin lawyers and intellectuals forged a temporary alliance with the Parisian poor. They did so to bring the numbers and revolutionary fervour they needed to overwhelm the ancien regime and its very strong aristocratic, clerical and military support. In doing so they forged a Jacobin legacy of minority-led, centralised, top-down reform.

Bernie Moss (1994) suggested this Jacobin alliance first destroyed the old State-Church economic privileges in the name of economic liberalism and then ‘pushed liberalism to the limits of socialism in 1794’. In so doing the Jacobins made a deadly enemy of the Catholic Church, with its still considerable powers of mobilisation among the peasantry, but without securing a permanent ally of equal weight among the rural workers or urban tradesmen.

While the Bourbon absolutist cork suppressing freedom and equality had exploded off in 1789, it was pushed back down by Napoléon Bonaparte’s military coup of 1799. His alliance of army generals and state administrators offered central control over the decentralised peasant-worker economy and gave wealthy merchants comparative stability of interest payments.

The vengeful Bourbons took up the task of holding the cork down from 1814 until 1830, when the July Revolution burst it off again.

Reinserted by the Bourbon’s cousin Louis-Philippe d’Orleans, the cork was again expelled in 1848, when Paris’ population was close to one million.

Then, in June 1848 the closure of the National Workshops sparked resistance in working-class Paris. The new bourgeois government brutally suppressed it. Some 5,000 died on the barricades and another 1,500 were summarily executed. 11,000 other leftists and resistance fighters were then jailed or deported.

From 1851 to 1870 the new Emperor, Louis-Napoléon, kept liberty and equality bottled up before losing his freedom to the Prussians, his imperial crown and Paris to the short-lived and viciously-suppressed 1871 Commune.

The ‘Bloody week’ began on May 21 1871 with the Versailles army ‘hacking their way into Paris in the bloodiest and most brutal fashion, executing anyone they suspected of having played an active role in the Commune’ and leaving ‘more than 20,000 Communards dead, nearly 40,000 imprisoned, and countless others in flight’. It took out over 3% of Paris’ two million population.

Harvey (2003) goes on to quote a letter from the ageing bourgeois Republican responsible, Adolpe Thiers, detailing the ruling class agenda: ‘The “reds”, totally vanquished, will not recommence their activities tomorrow; one does not engage twice in fifty years in such an immense fight as they have just lost.’

‘The Commune was produced out of a search to transform the power and social relations within a particular class configuration constituted within a particular space of a capitalist world that was itself in the full flood of dramatic transition. We have much to learn from the study of such struggles. And there is much to admire, much that inspires there, too.’

Over decades from the 1870s Republican governments balanced liberalism and the construction of a centralised modern capitalist state with peasant protectionism. The growth of endemic inequality alongside the shaping of a nationally dispersed industrial working class enabled the emergence of increasingly popular socialist currents.

While the working lives of at least half of France’s nineteenth century population were dominated by the weather, most of the rest experienced lives of job insecurity, job mobility and/or immigration.

The migrants (from poverty-ridden rural areas) and immigrants (from Belgium, Italy and Germany) who found themselves in coal mining, factory work or in desperate urban poverty, alternated between moments of total passivity when they believed these experiences were only temporary, and violent rebellion when they realised they were trapped.

Along with the more coherent and socialistic attitudes of the urban artisans, migrant worker responses to industrialisation made up the disparate and rebellious workers’ movement of what should be seen as a ‘long’ French nineteenth century that began in 1789 and only ended around 1918.

Fear of the poor and their potential to revolt was a constant concern. The sociologist Robert Castel (1995) argues that ‘what can properly be called an anti-worker racism was spread right through the nineteenth century bourgeoisie’.

Republicanism redefined itself as support for an elected head of state with limited powers combined with strong elements of both nationalism and secularism, defined largely as opposition to Catholic influence over government, education and social policy. It was only in 1892 that Pope Leon XIII finally asked French Catholics to recognise the reality of the Third Republic.

The Dreyfus affair in which a Jewish army captain was framed for treason in 1894 divided France politically between most of the socialists (increasingly influenced by Marxist ideas) and some left republicans and on the other side conservative Catholics and right republicans and anti-Semites who had never become fully reconciled to a democracy that allowed workers to influence government actions.

Gradually left and right-wing Republican formations emerged. In the early twentieth century the left Republicans increasingly faced competition for working class votes first from the Socialists and after the First World War also from the Communists, while right Republicans competed for votes among the Catholic, peasant and small business electorates.

Living under trade union illegality between 1791 and 1884, with both occasional counter-revolutionary repression and constant harassment of worker organisations and activities, deep divisions appeared among the slowly cohering working class.

Most workers with the courage to conduct illegal workplace organising were strongly anti-capitalist but there was little unanimity about what this meant.

Some rejected party-political activity in favour of trade union militancy pure and simple. But these activists were divided between those who wished to organise to overthrow capitalism, and those who used militancy to negotiate advantageous collective agreements with the employers.

In 1906 the CGT (Confédération générale du travail) trade union called its first General Strike to try and impose an eight-hour day on the employers. Later the same year it adopted the Amiens Charter, a programme embodying the key elements of revolutionary syndicalism – the rejection of the political process as a means of advancing workers’ conditions, and the adoption of the view that the trade union movement itself provides the organising framework for a new society.

Among those who believed it was possible to capture political power for the workers, there were different divisions. Broadly these were between revolutionary syndicalists, those who wished to orchestrate a revolutionary seizure of power, and the socialists who believed in forming electorally-oriented workers’ political parties to represent their interests and who in 1905 establlshed the French Section of the International Workers Association (SFIO).

In 1914, however, nearly all the socialists and trade unionists chose to support a ‘Holy Union’ against the German invaders rather than carry out their promises to mobilise in support of peace and internationalism.

1830: Glorious Revolution from one monarch to another

1830-1848: Republicans and Socialists under the Orléans monarchy

1871-1914: Between one war and another, socialism and trade unionism