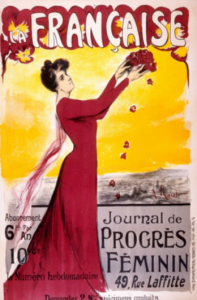 Living in the 18th arrondissement, she was Deputy General Secretary of the CGT’s post office trade union federation in 1931 and 1932, and then treasurer of the union in 1938.

A member of the executive of the French League for the rights of women, she is quoted as saying:

To be a trade unionist is a good thing, but to be both a trade unionist and a feminist is better, because feminism gives a shot in the arm to the trade unionist in danger of keeping to general facts and forgetting that a woman worker has twice as much to complain about because she is exploited twice: as a woman, and as a worker’.