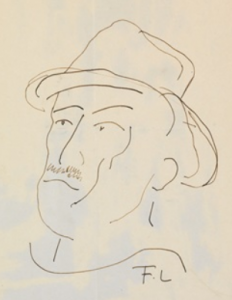 Already a well-known artist, in the 1930s Fernand Léger participated in anti-fascist marches and meetings, supported the Popular Front and joined the Communist Party aged 64 in 1945.

He trained at well known painting school, at 14 Rue de la Grande Chaumière, at the turn of the 20th century. Others who were trained there included Modigliani and Matisse.

By 1910 he had a studio in the Rue de l’ Ancienne Comédie, and was meeting other cubists every Tuesday at the Closerie des Lilas in the Boulevard du Montparnasse.

His interest in working people, and his concern about the need for mass education, emerged during his time in the trenches in the First World War. He wanted museums to open at night so ordinary people could visit them.

After nearly dying in a German mustard gas attack at Verdun Léger was demobilised and returned to live in Paris at 86, Rue Notre-Dame des Champs, where he lived for the rest of his life.

He joined the Association of Revolutionary Writers and Artists (AEAR) in December 1932. On 21 March 1933 he spoke at a meeting held in the masonic hall at 16, rue Cadet chaired by André Gide, protesting against the Nazi terror imposed after the Reichstag Fire of February 27.

In 1935 and 1936 he debated with Aragon about the direction of painting, arguing that there had to be a ‘new realism’ with its origins in modern life. Leger always defended individual creativity.

At the International exhibition of 1937 a huge mural of his was displayed at the Pavilion of Discovery.

Another massive paintings was on display at the Solidarity Pavilion. It was called ‘The CGT’s working class trade unionism’. I can’t find it anywhere, but that same year he produced an office ground plan for the Popular Front’s Minister of Education, Jean Zay.

All through the pre-war period Léger attended demonstrations and signed petitions against fascism, so in October 1940, he went to the US, believing he could not continue to paint under the German Occupation.

He returned to France in December 1945 and immediately joined the French Communist Party – an action that coincided with Picasso‘s similar decision that naturally made much bigger headlines.

While accepting his membership, Léger remained trebly suspect to the PCF. Not only, like Picasso, did he not paint to political orders, and often produced what the PCF considered ‘art that was inaccessible to the workers’; but also, unlike Picasso, he had left France between 1940 and 1945; and he had gone to live and work in the United States.

With his second wife, one of his pupils, Nadia Khodossievitch, he opened a studio and art school at 104, Boulevard de Clichy. His last ten years saw him paint prolifically and gain an international reputation.

Despite being overshadowed within the peace movement by Picasso’s dove, Léger, whose left political leanings and anti-fascist record resonated in the inter-war decades, continued to support the Communist-inspired peace movement and the Communist Party up to his death in 1955. while all the time refusing to paint in the ‘socialist realist’ style the PCF, following Stalin, preferred.