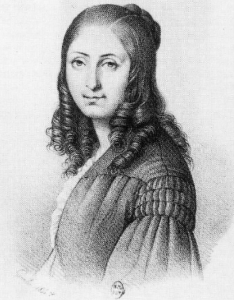 In 1843, at the time the young Karl Marx was living in Paris, Flora Tristan published a small pamphlet called ‘The Workers’ Union’ (L’Union ouvrière).

In it the 40-year-old Parisian woman made the case that workers were a single social class. Workers must organise themselves as such. She aimed to bring all men and women workers into a giant working class party, the Workers’ Union.
She was totally original at the time: she focused on the working class, all who worked without any property other than their labour power, and stressed the need for men and women workers as well as national and foreign workers to come together in a common project of social change.

Tristan was also a determined feminist.

In the booklet’s section called ‘Why I mention women’, Tristan denounced the way women were either ignored or treated as persona non grata by the Church and all political parties. Only if male workers recognized the need for unity could they share their different experiences and create real common objectives.

‘Workers, without women, you are nothing!’, she explained.

And, just as subversively, Tristan stressed that only if workers organised work themselves could they ever win liberty.
After the Workers’ Union pamphlet was published she set off on a national tour to promote local committees of the Union. Between April and November 1844 Flora Tristan criss-crossed France selling her pamphlet and holding meetings.

‘With my union project in my hand, from town to town, from one end of France to the other, to talk to the workers who do not know how to read and to those who do not have the time to read….I will go find them in their workshops; in their garrets and even, if needed, in their taverns.’

The campaign effectively killed her. She died in Bordeaux, probably of typhoid, just 41 years old.

Eight thousand people attended her funeral in Bordeaux. In the aftermath of the 1848 revolution, workers throughout France gave donations to erect a monument to Flora Tristan. It was inaugurated on 22 October 1848 in the Bordeaux Cimitière de la Chartreuse. The monument, a broken column, circled by a garland of oak and ivy, has a copy of her most important book, The Workers’ Union, at its top.

She was an extraordinary woman. Brought up by a mother widowed when Flora was four, the pair eventually had to live in one of the Restoration’s worst Paris slums in the Latin quarter’s Maubert area. Tristan lived in the Rue du Fouarre from 1815 to 1821.

She started work as an engraver and porcelaine painter. In 1821, aged 17, she married her employer, the painter and lithographer André François Chazal. Four years later, pregnant with Aline, and already mother of two children, she moved out of Paris back to her mother’s, near the Jardins du Roi (now the Jardins des Plantes), and began a life-long struggle for the right to divorce.
She lived working as a maid and lady’s companion, experiencing this as humiliation, but enabling her to visit England.

She visited London in 1826 and again in 1839, where she heard about the Grand National Consolidated Union and the Tolpuddle martyrs of 1834. In Paris, she became influenced by the Christian socialism of Saint Simone and others. She became a committed feminist socialist. and writer.

She criticised George Sand for hypocrisy. While applauding her use of ‘the novel as a medium to call attention to the harm done to women by our laws’, nonetheless Sand ‘has signed her works with the name of a man. How effective can accusations be when they are disguised as fiction?’ Tristan wanted to know.

In 1838, after she published a denunciation of her abusive marriage and a call for the right to divorce her violent husband stalked, and then shot her. Only then did the wounded Tristan get a legal separation, while the ex-husband got a 20-year prison sentence.

Tristan’s early death during her campaign for working class unity meant she could play no part when radical feminists put up a woman candidate in the 1849 male-only suffrage presidential election under the Second French Republic. And we will never know what she would have thought about the first Socialist president of the Fifth French Republic creating a Flora Tristan stamp in 1984.

But we can be pretty certain she would still be fighting for Socialism and Feminism. She would also be quite surprised and probably particularly upset that an 1892 painting titled ‘When will you marry?’ by her grandson, Aline’s son, Paul Gauguin (1848-1903), would fetch prices of over £200m in 2017.