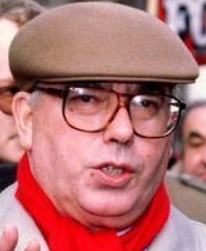 Marc Blondel was the first FO General Secretary to publicly shake hands with the Communist-supported CGT on 28 November 1995, helping kick off a decade-long mini-strike wave in France.

Working in a post office sorting centre in 1956, as one of the short-term jobs he did while beginning to study law, Bondel joined the Force ouvrière (CGT-FO) trade union that was particularly strongly implanted among government, local government and social security workers. It had been formed in 1948 with the support of the American CIA and AFL-CIO as an anti-Communist trade union pole.

On November 7 1956 the Fédération des employés et cadres Force ouvrière  Blondel had joined called a one hour stoppage in protest against the Russian suppression of the Hungarian Revolution. That year he also joined the national students’ organisation, UNEF (Union nationale des étudiants de France). It was one of the few national organisations backing Algerian independence at the time, and so came into conflict with the SFIO socialist party, which wasn’t.

Shortly afterwards Blondel became a freemason, joining the ‘Avant-garde maçonnique‘ lodge, linked to the influential Grand Orient de France. He then met many other leftists who were anti-clerical masons.

Whether as a result of these connections or not, on March 24 1960 he began to work for the government’s new Unemployment agency, the ASSEDIC. He quickly set up an FO branch in the office where he worked and created a trade union liaison committee of ASSDEIC offices across Paris. Later that year he became Paris regional secretary of FO branches across the government’s partly independent social security system.

Within a year he had secured full-time status with 100% relief from his ASSEDIC job to act as an FO official. In this period he also became close to Pierre Lambert‘s trotskyist Parti Communiste Internationaliste (which counted Lionel Jospin among its members in the 1960s), allowing it to use his FO office for its meetings.

By 1965 he had become the Paris regional secretary of the FO’s federation of white collar workers and managers. Nine years later he was elected General Secretary of the national federation and then, in 1980, the FO national congress elected him to the leading FO Confederation Committee.

By then Blondel was a member of the Socialist Party and in 1989 he was narrowly elected General Secretary with 54% of the membership vote after he received the support of the Lambertist Parti des Travailleurs. He had stood for a policy of ‘challenge trade unionism’ that he contrasted with ‘partnership trade unionism’.

Re-elected massively in 1992, 1996 and 2000 he was one of the principal leaders of the successful campaign against the government’s attempt to reform Social Security. During the 1995-1996 campaign his misogyny came to the fore in his attack on Nicole Notat, the CFDT’s general secretary, when he argued ‘His job was not to sleep with prime ministers’.