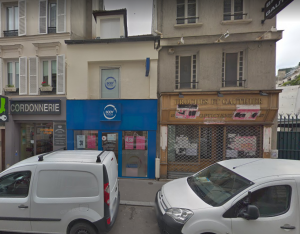 Under its earlier name of the Grande rue d’Auteil, No. 24 was the private house of Mme Helvétius , whose salon from 1772 to 1800 was visited by Diderot, Turgot, Benjamin Franklin, Thomas Jefferson and Thomas Paine as well as by Napoléon Bonaparte.

The Auteuil hamlet was close to the vast forest of Rouvray of which today the only remains are the Bois de Boulogne.

Under the Second Empire the house at 59 rue d’Auteuil was owned by the Emperor’s cousin, Pierre Bonaparte, and was where he shot and killed the unarmed young journalist Victor Noir on January 10 1870. Pierre Bonaparte was quickly found not guilty after a trial heard from several conjured up witnesses, while Noir was buried in Neuilly – and only removed as a Republican symbol to Paris’ Père-Lachaise in 1891.

Tens of thousands of outraged republicans, including Louise Michel dressed as a man and carrying a knife, marched in his funeral cortege.

Nothing remains of the superb original building, which was burnt to the ground by the Communards in May 1871. There is now only a huge apartment block at the spot.

However, somewhat ironically, the chemist shop at No. 27, just down the street, where Noir finally died at 2 pm in the afternoon, is now called ‘Body Minute’.

Living further up the street in 1848, at Nos. 63-73, was Louis-Philippe’s vehemently anti-Republican prime minister, François Guizot,.