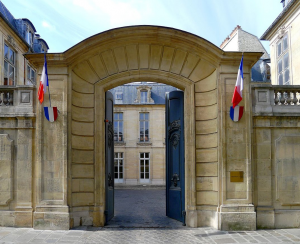 The 2.5 kilometre road was named Rue Saint-Dominique in 1631 after the Dominican order set itself up on what had been a long path leading to the Saint-Germain-des-Prés Abbey complex.

The Hotel de Brienne at No. 14 (see entrance above) had been bought by Louis XVIII in 1817 to house the Ministry of War. In April 1871 Gustave Cluseret installed the Central Committee of the National Guard in the War Ministry. Its last meeting there took place on May 23.

The Ministry of Public Works at No. 62 was the location of efforts by the Paris Commune first, on May 10 1871, to discuss workers’ conditions and second, on May 15, to create an enquiry made up of 11 trade associations and the Women’s Union into abandoned workshops.

At an unknown location in the road a barricade was erected rapidly on May 22 1871 when the news arrived that the Versaillais troops had entered Paris. This was one of the 900 estimated by Robert Tombs (1971) to have been erected by the Commune’s defenders.

After the April 4 1894 bombing in the Rue de Conde, the police searched Félix Fénéon‘s office at the Ministry of War in , finding enough evidence of his complicity to put him on trial with the others in the August show trial of 30 anarchists.

The Ministry of War also was where Alfred Dreyfus was arrested on October 15 1894. The campaign for his innocence was largely responsible for creating the unity of the left in the early 20th century.

Charles Marville’s (1813-1879) photographic studio was at No. 27. We have used several of his pictures to illustrate Leftinparis since he was the photographer contracted by Haussmann to take pictures of the streets that would disappear in the remodelling of Paris.

On January 6 1927 Aragon and a comrade from the same Communist cell , Benjamin Péret, signed up to the La Famille Nouvelle workers’ cooperative at No. 101. This was also where in 1932 Aragon organised meetings of the Association des écrivains et artistes révolutionnaires (the AÉAR ).

In 1929 No. 28, a huge early 18th century mansion belonging to La Rochefoucauld d’Estissac was bought by the Chemical Industry Foundation and turned into the Maison de la Chimie (Chemistry House).

This was the venue for the trial by German court martial of 27 Resistance fighters from the PCF’s Youth Battalions (16) and Special Organisation (9) from April 7 to 14 1942. The 28th fighter arrested, the Catalan communist Conrad Miret i Musté, was tortured to death at the Santé prison on February 27. All except four were shot at the Mont-Valérien fort on April 17. One of these, a 22-year-old Polish-origin Jewish woman, Simone Schloss, was guillotined on July 17 1942 in Cologne. Her name is among the list of those shot on the plaque on the wall at No 28 opposite the Maison de la Chimie.

At the end of the German occupation De Gaulle set up his Provisional Government on 25 August 1944 in the War Ministry. This was where he dissolved the Paris Resistance movement on August 28 1944, calling the 20 major Resistance leaders ‘secondhand officers’.

In November 1972 a meeting called by the lawyer Gisèle Halimi in the offices at No. 102 of ‘Choose – A woman’s cause‘ (Choisir – la cause des femmes) with some of the women who had signed the Manifesto of the 343 declaring they had had an illegal abortion. Among those who had signed were Simone de Beauvoir, Catherine Deneuve, Marguerite Duras, Jeanne Moreau, and Françoise Sagan.

The meeting helped organise the legal defence of the five women who were tried at Bobigny on November 8 for having supported a 16-year-old who had had an abortion after being raped. De Beauvoir, president of Choisir, gave evidence attacking the 1920 law that outlawed abortion and made any mention of it in the press illegal. The action and publicity surrounding this trial was a key turning point in the campaign to legalise abortion in France.