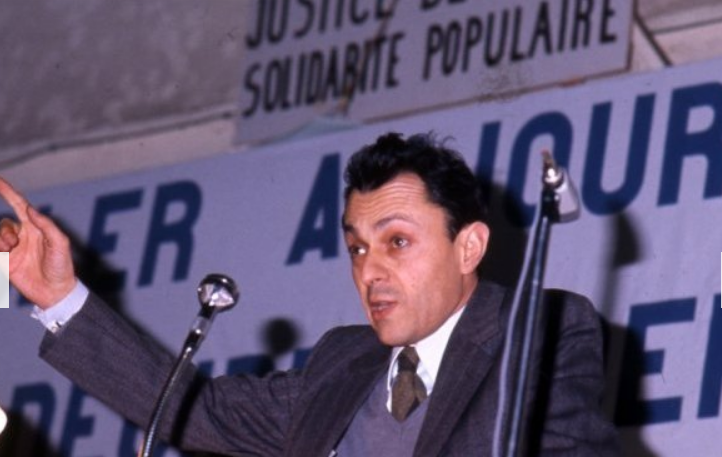 A product of the elite adminstrative education, ENA, established by De Gaulle, Rocard opposed the Algerian War. He joined the United Socialist Party (the new left PSU), and was its candidate in the 1969 presidential election.

This long 17th century road linked Charonne to Paris long before the village was annexed in 1860.

Ho Chi Minh lived in the street in 1917, when he first arrived in Paris.

On February 8 1962 trade union and left political party demonstrators against the OAS and in support of Algerian independence were viciously attacked by the Parisian police as they sought shelter in the metro station Charonne. Maurice Papon, Paris police chief with the backing of the President de Gaulle ordered the police to disperse the illegal demonstration. Six men and three women were killed and some 250 wounded.

Most of those suffocated or killed with blows to the head were members of the CGT trade union.

The following day over half a million demonstrators marched to the Père-Lachaise  cemetery, while the prime minister, Michel Debré visited police stations and wrote a letter to Papon congratulating him and his men. Papon had previously been involved in the murders of hundreds of Algerians in Paris at the FLN demonstration of 17 October 1961. He was finally sentenced to 10 years in prison in 1998 for complicity in the deportation of Jews between 1942 and 1944.

On February 8 2007 the Socialist mayor of Paris, Bertrand Delanoë, named the junction between the boulevard Voltaire and the rue de Charonne in commemoration: La Place du 8-février-1962. there is also a plaque inside the metro station.

The same street witnessed 19 people killed and 14 wounded on 13 November 2015 when two gunmen opened fire on the terrace of La Belle Équipe restaurant at No. 92, when 130 people in total were murdered that night.