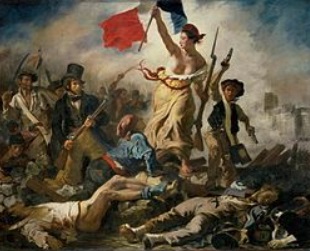 On 27 July 1830, the day after Charles X’s four decrees were printed, four newspapers appeared illegally. Print workers resisted the seizure of their presses by the police. In that afternoon’s protest riots, encouraged by republicans like the student, Auguste Blanqui, broke out near the Palais-Royal. In the early evening troops shot and killed some of the demonstrators.

The next morning, 28 July, barricades appeared across the centre and East of the city. An estimated 10,000 protestors raided local armouries. The Hôtel de Ville (Town Hall) was seized. The French revolutionary anthem, La Marseillaise, that had been the official national song from 1795 to 1804, was sung everywhere. The plain white Bourbon French flag was pulled down and the Tricolour flag raised. Charles X still rejected any compromise and called on his troops to stand firm.

On the morning of 29 July 1830 many new barricades appeared. But the 5th and 53rd foot soldier regiments at the Place Vendôme) went over to the people. The royal Tuileries Palace (finally destroyed in 1848) came under attack. Charles X’s remaining troops left Paris to defend the king at the Chateau of Saint-Cloud.

Over the next two days Charles X slowly realised he could not continue and tried instead to get his young grandson endorsed by the parliamentary deputies to reign under a regent. The republican deputies were few in number, and the majority of deputies, constitutional monarchists, played upon the fear of a new republic.

Not trusting Charles X, some deputies then entered negotiations with the 57-year-old Louis-Philippe, Duke of Orléans, Charles’ cousin.  On July 31 Charles X fled from Saint-Cloud and – seeing the throne vacant – Louis-Philippe d’Orléans agreed to accept the Tricolour flag and to rule as a constitutional monarch as ‘king of the French’ rather than as ‘king of France’.

Roughly 800 Parisians and 200 soldiers were killed during the three July days of riots, barricades and fighting. Delacroix painted his famous Liberty leading the People soon afterwards.

One reason for the small number of troops (8,000) at Charles X’s disposal in July 1830 was his decision to send soldiers to take over Algeria through seizing Algiers on July 5 1830. The invasion succeeded, but still failed to win him rapidly enough the popular support that he craved in France. What it did was to initiate a military pacification campaign that lasted the following 45 years before the struggle for national independence was renewed in the 1950s.