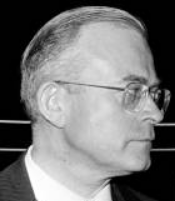 André Bergeron was a strong anti-Communist who saw the role of trade unions as being totally independent of political parties and exclusively as negotiating agreements with the employers.

A printworker and then postman, he joined the Young Socialists in 1936. He became an official of the CGT-Force ouvrière in 1948, when it was being actively supported and funded by the AFL-CIO, and became its General Secretary from 1964 to 1989.