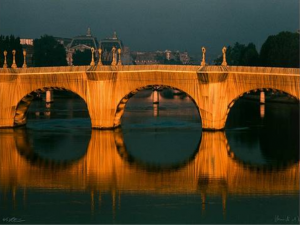 A broad historical sweep of Parisian revolutions and bridges

Paris is at the fulcrum of left struggles in France. Absolutist regimes were repeatedly burst apart and then restored. Having forcibly imposed a constitutional monarch on France in 1789 Paris and France were then ruled by committees, monarchs or emperors with little or no constitutional basis for the next 90 years.

Opposition and popular resistance to the Bourbons, to the Empire, to the German occupations, and to a particularly vicious capitalist class and state fed into and stimulated the Left.

1. The contrast between a rigid centralised political and social system and its rapidly changing economy creates periodic revolutionary explosions in France’s most industrialised city, Paris.

2. The memory of dramatic revolutionary change is widely embedded as an always present possibility. Its cosmopolitan, radical history and almost daily protests against nearly all manifestations of capitalism inspired and inspire artists, writers, revolutionaries.

3. The preserved beauty of the city attracts lovers and dreamers beneath its bridges.

‘Is it perhaps both France’s tragedy and the secret of its charm that it has never really been won over to capitalism?’

There are still unresolved struggles between market freedom and social freedom, between social equality and market inequality and between class solidarity from below and top-down Jacobin fraternal reformism.

Sometimes it is easy to forget that central Paris remains small by international capital city standards, growing only five-fold during the 19th century to its less than 3 million population maximum in 1921, despite its expansion to 20 arrondissements in 1861.

Hazan (IOP, 2009) reminds us therefore that since the 1980s ‘what has changed is not so much the mineral and vegetable setting as the way in which the city is inhabited’.

The Right Bank is as divided as ever, between the bourgeois centre and west and the still working class east and especially northeast. A sizeable section of the city’s manual and white collar working classes, particularly those from migrant backgrounds, now occupy the former ‘red belt’ suburbs, the banlieu ringing Paris from Ivry and Vitry in the south to Saint-Denis and Aubervilliers in the north.

On the Left Bank the Chinatown in the 13th arrondissement continues to grow, but Hazan writes that everywhere else ‘the population has remained almost uniformly white and bourgeois. The Blacks are street sweepers, the Arabs are grocers, the police are rarely seen and the historic streets are as clean as in the pedestrianized zones of the provinces’.

The central city streets remain the locus of much Left political action. After each demonstration passes a huge mechanised clean-up operation takes place, sweeping up and repairing the broken bus-shelter glass, and turning the city’s huge recycling containers the right way up.

Paris means many things to many people. A catchy love song about Parisian bridges was doing the rounds in the mid-1950s when I became a teenager.

How would you like to be
Down by the Seine with me
Oh, what I’d give for a moment or two
Under the bridges of Paris with you…

In this song Eartha Kitt (1953) and Dean Martin (1955) presented Paris as pure romance. I have felt this too, with each of Stevie, Joan, Sylvie and Marian who have shared my life, dreams and Paris walks at different times and ages from 17 to my present 74+.

But the original 1913 French lyrics accompanying the Vincent Scotto score tells a much more nuanced tale. Both songs are available on You Tube.

After work in a factory, Rodor’s young lovers, Julot and Nini, exchange kisses near the river, but at night, when everyone else is sleeping…

All sorts of types sneak under the bridges
Happy to find there a berth in the
Hotel of the Open Air,
Where you don’t pay much
The odour and the water cost nothing, my lord,
Under the bridges of Paris…

The Paris sung about in the words written in 1913 is how I remember its feel and smell in 1956 when I first visited, and still again in 1964, when I first lived in the city for eight months.

There are now 37 bridges spanning the Seine, at least five more than when I first walked beneath them.

Rodor’s call for action over Parisian homelessness and poverty and migrants over a hundred years ago remains just as important today, even if central Paris has been largely cleansed of its visible poor.

We on the Left, our hopes, ideas and actions are still needed to build a society ‘in which all women and men irrespective of sex or nationality will enjoy the wealth produced by the work of all workers’ (Call for the Second International founding conference held in Paris from July 14 to July 21 1889).

Left in Paris is an unfinished story.

From this historical sweep to broad overviews and detailed periods

Three broad overviews of the context in which the Left emerged in Paris cover the nearly 250 years since the first French Revolution: 1750-1914 Revolutionary Questions, 1914-1962 War War and More War, and 1962-2020 Left challenges.

Closer views of the Left histories within each of these periods can be found in the PERIODS menu and at the end of each overview.

Brief discussions of the political ideas, culture and organisations of the Left since roughly 1830 can be found in the POLITICS menu. Although they all overlap, we have presented them in ten groups: Anarchism, Art, Communism, Cooperatism, Ecology, Feminism, Human rights (including national liberation struggles and struggles for the vote), Literature, Socialism and Trade Unionism.

The people who brought these histories to life are present through the PEOPLE menu, and the locations of their lives and activities can be found in the PLACES menu.