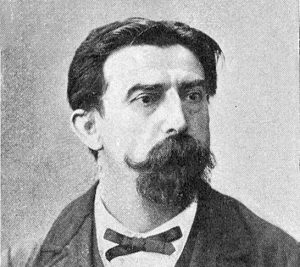 On March 31 1871 Jean Allemane was present when the Red Flag was raised on the cross that had had its two arms sawn off on top of the Saint Geneviève church which had been turned back into the Panthéon.

The 5th arrondissement’s Committee of Vigilance attended by Allemane used to meet at 17 Rue Pascal during the Commune. This was an old masonic meeting place.

As a 27-year-old printworker wearing a big red belt he was active (and visible) in the 5th arrondissement fighting around the Pantheon in the Bloody Week of May 1871.

There was fighting at most of the barricades in the Fifth arrondissement during the Commune’s final ‘bloody week’. There are reports of Jean Allemane and Maxime Lisbonne being present at those in Rue Cujas, Rue des Fossés Saint Jacques, Rue Malebranche, Place Maubert and Rue Soufflot. When the barricades fell, many of their defenders were shot on the spot or after improvised military tribunals with priority given to serving soldiers and foreigners who had come to support the Commune. Some 400 prisoners were shot after the fighting.

Allemane is recorded as having led the defence of the Quarter on May 24 and having directly commanded a barricade in the rue du Pot de Fer which was also defended by many women.

At the Mairie/Town Hall of the Fifth arrondissement at 21 Place du Panthéon, Allemane had locked Joseph Piazza inside on May 24 1871 to protect him from his men who accused him of sacrificing them in vain. But the Communards forgot to release Piazza when they retreated from the Marie and he was shot by the Versaillais.

Allemane survived and was deported after the defeat of the Commune. A widower, he was living at the bar he ran at 14 rue Maître Albert with his mother and son Charles when he was arrested on May 28 1871.

A week after he returned to Paris after finally being amnestied, on May 15 1880 Allemane married a seamstress, Adèle Quénot, at the 6 Place Gambetta, Town Hall of the 20th arrondissement with whom he had already had two children.

In 1885, while still working as a typesetter and page designer at the Rue du Croissant printworks, he opened his own small printing shop, the Productrice at 51 Rue Saint-Saveur. Shortly afterwards he turned the business into a cooperative.

In 1880 he joined the Federation of French Socialist Workers (FTSF) that had been created at the Lyon Congress in 1878. When that party split in 1882, with Jules Guesde and Paul Lafargue leaving and creating the Parti ouvrier (French Workers’ Party), Allemane stayed with Paul Brousse and the Parisian majority.

In the 1880s he created the Allemanist syndicalist tendency within French socialism. The socialists who remained in the FTSF were called ‘possibilists’ as against the ‘doctrinaires’. The possibilists tended to be federalists while the doctrinaires were more likely to be centralists.

In 1889 Allemane was a founding member of the Société fraternelle des anciens combattants de la Commune (Fraternal society of Former Communards’. He was a regular follower of its meetings at a wine merchants at 133 Rue Saint-Antoine.

Allemane became the leading spokesperson for the FTSF in the 1890s.

From December 6-9 1899 he participated in the first congress of French socialist organisations, along with Jean Jaurès and Paul Lafargue in the Salle Japy in the Rue Japy. This was a huge gymnasium in the 11th Arrondissement set up in 1884 that could seat 1,500 people.

After the second congress in the Salle Wagram (at 37-39 Avenue de Wagram) in September 1900, Allemane was nominated to the Agreement Committee working party of the different organisations. It met regularly at 17 rue Portefoin.