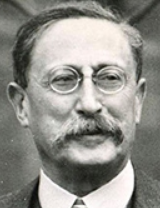 Radicalised by the Dreyfus Affair he became the major Jewish figure of French socialism in the interwar years. Léon Blum became Popular Front prime minister from 1936 to 1938. He was imprisoned in Buchenwald from 1943 to 1945 after having been handed to the Germans by the Vichy regime. He was briefly prime minister again in 1946-47.

During the first half of the 20th century, alongside his mentor Jean Jaurès, Blum personified the alternative to the insurrectionary road to socialism.

He was born on April 9 1872 at 151, Rue Saint-Denis, above the silk wholesale business run by his father in a street whose northern stretch is still today dominated by the textile trade. A really bright student, from 1882 to 1888 he attended the Lycée Charlemagne in the Marais, while boarding in the Rue des Francs-Bourgeois.

He then went on to the still more prestigious Lycée Henri-IV in Rue Clovis in the Latin Quarter on the Left Bank of the Seine., where he met Andre Gide. Blum’s final thesis there argued that criminals should be examined through the interplay of independent factors leading to their crime’.

Aged 18 he passed directly into the École Normale Supérieure (ENS) in the Rue d’Ulm in 1890. Failing his first year exams he then moved to studying literature and law, getting a law degree at Paris University in 1894.

Attracted by the strong anarchist current of the early 1890s, he was writing for the libertarian journal La Revue Blanche for nearly nine years from 1892. But both he and Lucien Herr whom he met at the ENS, moved away from individualism towards socialism.

Blum successfully passed exams to become a top notch civil servant in the Conseil d’Etat in December 1895. He kept this post for the next 25 years and in 1896 married Lise Bloch and moved to the Rue du Luxembourg, on the west of the Luxembourg Garden,that is now called the Rue Guynemer.

Herr’s friendship was a key factor in Blum’s involvement in the campaign to pardon Dreyfus. It was at Herr’s flat that he first met Jean Jaurès, where both were persuaded of the Dreyfus’ innocence. Later, Blum wrote that this was where he became a socialist: ‘from the injustice inflicted on an individual, we tried, as Jaurès did from the start, to generalise it to social injustice’.

His death was the occasion of another of the huge left funeral processions that regularly punctuate French history. It left from the Rue Victor Massé offices of the evening socialist paper Le Populaire, founded in 1916, by Jean Longuet, Marx‘s grandson, and closely associated with the SFIO and Blum from 1921.