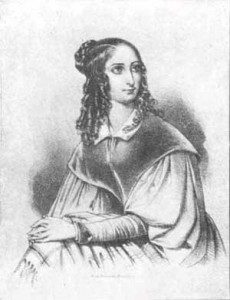 In 2016 I followed the Parisian footsteps today of an amazing early French socialist, trade unionist and feminist who was effectively judicially murdered at the age of 47 by the populist dictator Napoleon III.

Pauline Roland was a contemporary and friend of George Sand, Flora Tristan and of Pierre Leroux, a printworker and socialist. After Roland’s premature death Victor Hugo, in exile in Jersey in protest against the dictator Louis Bonaparte, wrote a poem called ‘Pauline Roland’.
Very few French people have heard of her today, although the oldest women and children’s refuge in Paris (dating form 1890) is named after her. Only one of the houses she actually lived in and organized from is still standing (near St Germain des Prés, at 10 rue Jacob in the same street where Simone de Beauvoir later attended secondary school). The others I walked to today had all been knocked down and rebuilt between the 1890s and 1960s.

Roland supported herself from the age of 20 when she started working in a bookshop. From the age of 28 (in 1833) to 40 (in 1845) she had an open relationship with another Sainte-Simonian socialist man, Jean Aicard, in Paris, had two children with him, and another child with another father. She insisted all the children carry her name and must be financially raised by her.

‘I will never agree to marry a man in a society that cannot recognize my absolute equality with the person I am forming a union with,’ she argued.

She survived financially by also writing for feminist newspapers and writing histories of France, England, Scotland and Ireland. In 1847 she worked as a teacher at the socialist Saint-Simonian Community established by Pierre Leroux at Boussac (in the Limousin in central France) with funding from George Sand.

Roland was a Republican, a trade unionist and a leading feminist. During the 1848 Revolution she became the leader of the Women’s Republican Club (at 8 rue de Trevise).

A year later she founded and led the Fraternal Association of Socialist Male and Female Teachers and Professors (at 21 rue Henri Monnier). Its programme stressed gender equality, called for universal education until 18 and for women to remain in the labour force.

Her next crime in the eyes of the dominant political conservatives was to play a key part in organizing a Union of Workers’ Associations. In October 1849 delegates from 100 trades elected Roland to its central committee. Six months later she was one of 30 people arrested after a government clamp-down on organized dissent.
But an even bigger crime in the eyes of the judges was her feminism. She was charged with ’socialism, feminism and debauchery’. She spent the first seven months of 1851 in jail.

On December 2 1851 Louis-Napoleon Bonaparte realized he would lose upcoming elections and organized a coup d’état to seize power and declare himself Emperor. Roland, despite coming out of prison in poor health, threw herself into the resistance movement. It failed, she was rearrested early in 1852 at her home at 106 rue du Bac, and sentenced to 10 years’ deportation to the recently invaded (1830) French colony of Algeria.

Unlike many other political prisoners Roland refused to ask for a pardon from the dictator-Emperor. She was transported and forced to do hard labour and cleaning work when she got to Algeria. Three months later, her friends George Sand and the biggest singer song-writer of the day (Beranger) persuaded Louis Bonaparte to release her. Too late. She died at Lyon in December 1852 on her way home to Paris.