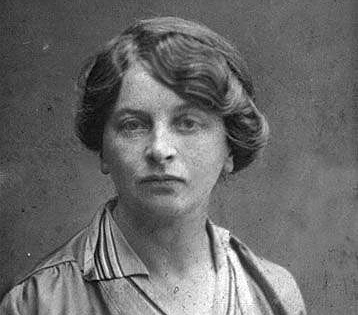 French mother of five who was brought up in Russia and became a teacher at the Bolshevik training school in Paris, Armand became Lenin’s lover in 1910 and then inseparable from him for the next ten years.

Armand was born in Paris as Inès Stéphane with her mother an English teacher of singing. When her father died an aunt found work for her mother in Moscow, where Inessa too started to work teaching private lessons in singing and languages. One of the Russian families she worked for was the Armand family, and at 18 she married the oldest son, giving birth to three children between 1894 and 1901, and a fourth in Lausanne in 1903.

She returned to Moscow and joined the social democratic party, where she was arrested on January 6 1905. Released on October 22 1905 during the general strike, she was arrested again on June 7 1907 and exiled to Siberia. Escaping from there in November 1908 she got to Belgium in 1909 and then to Paris in 1910, where she lived initially at 241 Rue Saint-Jacques.

Working with the Bolshevik faction saw her meet Lenin. Lenin fell head over heels in love with Armand. Observers wrote: ‘He doesn’t take his eyes off her’.

Lenin then invited her to teach at the Longjumeau cadre training school he set up in the Spring and Summer of 1911.

In 1910 Lenin had rented her a flat in the building next door to him and Krupskaya in the Rue Marie Rose in the 14th arrondissement. [No plaque at his address now].

In 1910-11 she and Lenin used to pop out to the Cafe d’Orleans, then 10 minutes from their street. But that was knocked down and the current cafe (on the opposite side of the Avenue General Leclerc) is even closer to the street where they were neighbours, but without the 19th century decor.

Inessa was very close to Lenin from then until she died in Russia of cholera in 1920 aged 46. She had travelled back in the armoured train through Germany with Lenin in 1917, although here presence was always kept out of the official Communist hagiography.

Armand organised a conference of working women in 1918 and then chaired the First International Conference of Communist Women. She also supported the Workers’ Opposition to the early bureaucratisation of the Bolsheviks in power. Some woman!