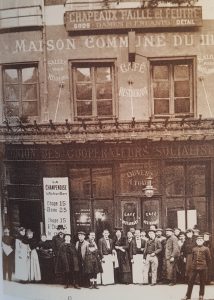 The road was named ‘Brittany’ after a never completed project of Henry IV to build a great square into which several streets would run, each with the name of a different province. After two streets were merged in 1851 the road is nearly half a kilometre in length. The even-numbered side of the road was demolished in 1920 to widen the road to its present width.

No. 14 was where the first issue of the centre-left newspaper Libération was prepared and published on April 18 1973.

The oldest covered market in Paris at No. 39, the Market of the Red Children (Le marché des Enfants Rouges), was established in 1628 near an orphanage whose children were dressed in red, the colour of charity). During the ‘Bloody week’ at the end of the Paris Commune in May 1871 the market was fortified and defended.

On January 2 1910 Lenin attended a revolutionary ‘goguette‘ – a kind of drinking + sing-song / poetry-and-literature dinner with roughly 20 people – organised by La Muse Rouge in a room on the first floor of No. 49. We don’t know if he was accompanied by Krupskaya or Inessa.

The venue (shown in the photograph above taken in the 1910s) was the Third arrondissement’s communal building. At the time there were hundreds of these goguette events being organised regularly in Paris. The Muse Rouge theatre group was expelled by the PCF in 1925.

By 1921 the building included the office of the Paris Federation of the SFIO (Socialists) and this was where Breton and Aragon came to apply to join the new French Section of the Communist International, less than a week after the majority of socialists had voted at the Tours Congress to affiliate to the Third International.

In 1922 the cooperative workers’ restaurant and café La Famille Nouvelle based at No. 49 was visited by many leftists including Ho Chi Minh. Many left events took place, including monthly dinners of the Revolutionary Esperantists, who were entertained by the Socialist Federation’s choir.

On September 1 1939 Palmiro Togliatti was arrested by the French police and taken to the Police Station at No. 62. They didn’t find out his true identity and he was jailed only for holding false papers and finally released in February 1940.

In the bloody week of May 1871 a barricade across the road at No. 71 defended by the 86th National Guard battalion mounted strong resistance to the Versaillais troops. This was also the address where Sylvain Maréchal, who drafted the Equality Manifesto of April 1796 is supposed to have lived.