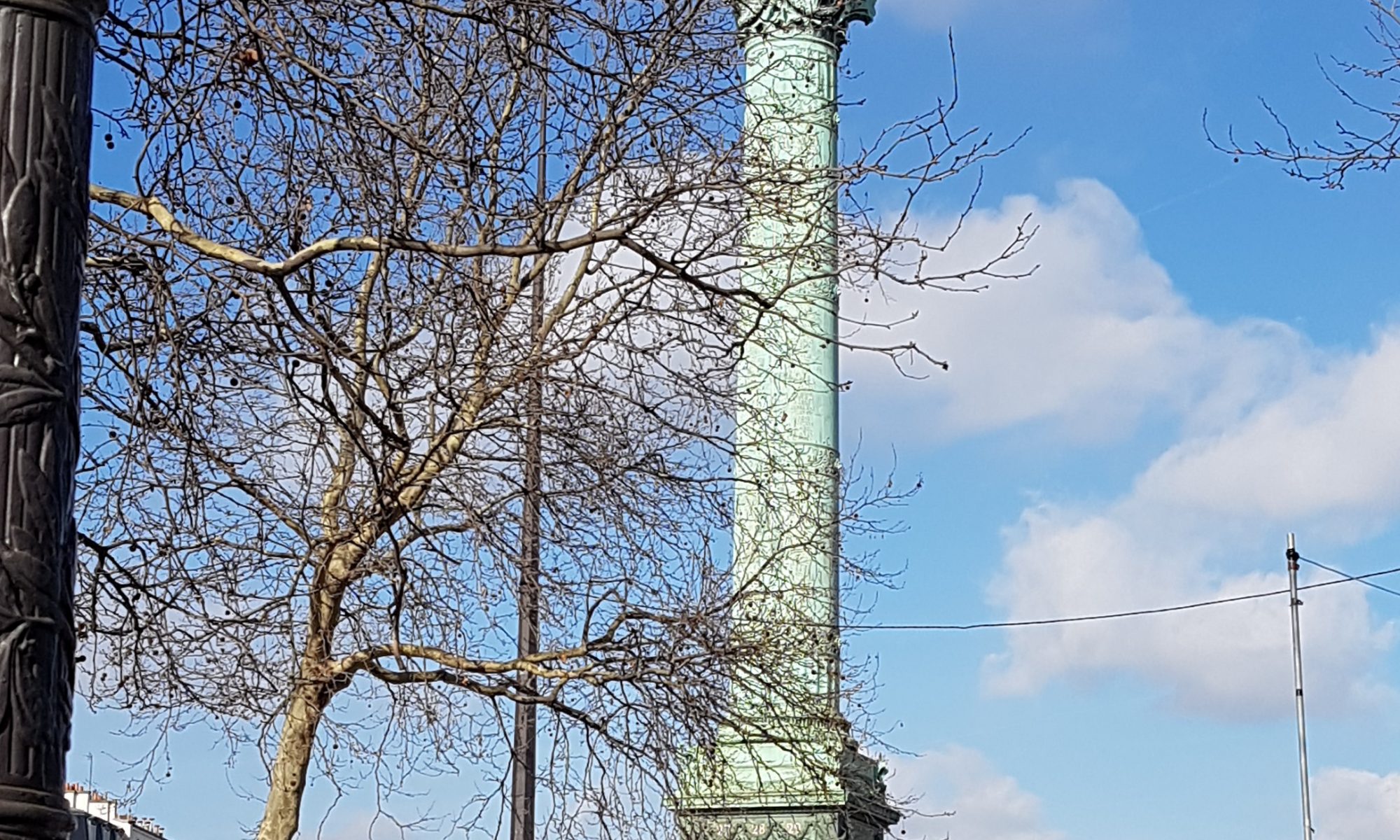 Called after the ‘small fort’ originally built next to the St Antoine gate into Paris and then turned into a stone fort in 1370, the Bastille soon became a six tower fortress with thick walls and a moat. By 1553 it was an eight-tower fortress with a copper-bottomed moat. In the 17th century it was turned into the prison that was eventually taken by Paris’ newly-formed militia and local people on July 14 1789.

Demolition began almost immediately. Voltaire’s coffin was symbolically brought there on its way to the Pantheon on July 11 1791.

In 1792 it was decided to turn it into a huge square, the Place Antoine. The Marseillais volunteer national guardsmen arrived there singing the song that became the national anthem on July 30 1792.

From June 9 to June 14 1794 the guillotine was installed in the ruins of the fort. But after killing 73 people in less than three days the local shopkeepers complained so much (about the smell and those who had come to watch) that it was moved to what is now called the Place de la Nation, and was then the Square of the Overthrown Crown.

After the 1830 Revolution the new King Louis-Philippe decided to erect a column in the middle of the square to honour the 615 victims of the ‘Trois Glorieuses‘ Revolution – the Three Glory Days. It was inaugurated in 1840.

On April 13 1834 barricades went up in the square as local workers rioted in support of the silk workers’ insurrection in Lyon.

On February 24 1848 Louis-Philippe’s throne was taken from the Tuileries Palace and ceremoniously burnt at the foot of the July column. Three days later the 196 dead in the February Revolution were buried in the crypt beneath the column, and the Second Republic was officially proclaimed there.

On June 24 1848, when the new right-wing government announced the dissolution of the National Workshops, the Bastille square was entirely circled by barricades, and a red flag placed in the hands of Dumont’s 1836 allegorical statue le Génie de la Liberté flew briefly from the top of the July Column to accompany the flame of freedom and the broken chains of despotism.

A red flag flew again on top of the column on February 24 1871, when 14 battalions of the National Guard marched by in a commemoration of the 1848 revolution. The government’s attempt to replace the flag by the Tricolour on February 26 and March 9 1871 both failed.

During the 1871 Paris Commune three local sections of the International Workingmen’s Association used to meet in the Cour Damoye at No. 12.

The Communards fought hard to defend the symbol of revolutionary liberty, but were eventually overrun by the Versaillais. During the bloody week of May 1871 nearly all were killed in the fighting or shot afterwards.

The Place de la Bastille became the symbol of left and republican resistance.

The first Parisian demonstration of Communards after the suppression of the Commune took place at the Bastille square on May 9 1880.

On July 14 1935 a demonstration that brought together both Socialists and Communists marched from the Bastille to Vincennes. This was called under the name of ‘People Together’ (Rassemblement populaire) that became the Popular Front that won the 1936 parliamentary elections.

Since 1991 the Marche de les Fiertes have usually begun or ended at the Place de la Bastille. In the 21st century they have usually attracted at least half a million people. There were certainly about that number when Marian and I watched for hours as the marchers went by.

On April 30 1870 Louis-Napoleon‘s new more liberal government drummed up a red scare and arrested 38 active supporters of the First International just days before a referendum on the latest constitutional moves towards a slightly more parliamentary government system. The ‘reds’ were jailed at the Mazas Prison with its American-style cells. The idea was to keep prisoners isolated at all times from one another.

One of the new prison’s earliest political uses was in briefly jailing the republican Assembly representatives and other opponents of Louis-Napoleon’s coup d’Etat of December 2 1851. Among these was the socialist biologist François-Vincent Raspail (1794-1878). His sentence was commuted to exile from which he returned in 1862.

After Louis-Napoleon won the May 8 1870 referendum overwhelmingly by 7.4 million votes to 1.5 million, the republicans believed the Empire was stronger than ever. On July 18 France declared war on Prussia. The Third Republic was declared on September 8.

The 16-year-old Arthur Rimbaud was held at the Mazas prison for a few days from 29 August 1870 on suspicion of being a Prussian spy.

The prison was used to keep many of the hostages taken by the Commune in April 1871 intended (unsuccessfully) to be exchanged for Auguste Blanqui. It was the site of fierce fighting during the Bloody Week of May 1871. After the Austerlitz bridge was taken by the Versaillais on 25 May, the defenders retreated to the prison and fought from there. On 26 May more than 400 Communards were executed there, with their bodies thrown into a well.

In 1894 the 30 anarchists and anarchist sympathisers were imprisoned at the Mazas during their trial for conspiracy to commit bomb attacks and murders in Paris. Felix Fénéon (1861-1944) was sketched here by another anarchist sympathiser, Maximillien Luce , who also produced a lithograph self-portrait of the inside of his prison cell.

Both Fénéon and Luce and another 24 of those tried in August 1894 were acquitted.

The word faubourg derives from old French meaning ‘outside the village/town/abbey). Saint-Antoine was the name of the hamlet built outside the 13th century Saint-Antoine-des-Champs abbey walls, on whose site stands the Saint-Antoine Hospital.

The abbey brought in the carpenters, varnishers, tapestry-makers, glass makers (Saint-Gobain started here in 1665 thanks to Colbert) that made the area the most populated in Paris in the 18th century.

It was also the most revolutionary, with its workers forming the biggest contingent among those who attacked the Bastille prison and armoury in 1789. On July 30 1792, when the Marseillais volunteers marched into Paris along the road singing the Chant de marche pour l’armée du Rhin, they had no idea that this song by Claude Joseph Rouget de Lisle would become the French national anthem for the first time in 1795.

At an address in the road that is unknown, Pierre-Jean Beranger lived with his grandfather in the 1780s, before being taken by him to see the storming of the Bastille in 1789. This influence, and that of an uncle, mitigated against that of his father, and put Beranger on the side of ordinary people for most of his life.

One of the few barricades in the insurrection of June 6 1832 that followed the funeral of the republican sympathiser General Lamarque was outside No. 2. This short-lived insurrection was made famous by Victor Hugo in Les Misérables in his description of the barricade in the Rue Saint- Martin.

On June 25 1848 some 29 barricades were erected in the Sainte-Antoine district. The one across the road between No. 1 and No. 2 was where the Archbishop of Paris, Denys Affre, was mortally wounded by Cavaignac‘s soldiers when he tried to persuade both sides to stop fighting. The barricade fell shortly afterwards.

In 1871 the road was once more barricaded by the citizen-soldiers of the National Guard, called the fédérés. One of the most important again was built on March 18 1871 to block the road between No. 1 and No. 2 and prevent access to the Bastille square. Over 100 Communards were killed in the battle before it was taken by the Versaillais army on May 26 1871.

Another barricade in the road in May 1871 ran across the Rue de Charonne from No. 63. This was where Marx’s personal envoy to the Commune, Elisabeth Dmitrieff, helped the Hungarian member of the First International, Léo Fränkel who was wounded on the barricade there on May 25 1871.

On December 3 1851 it was at a barricade crossing from what is now the Rue Trousseau at No. 151 that Victor Schoelcher joined the protest against the seizure of power by Louis-Napoleon and tried to raise a revolt in a working class area. He saw his fellow deputy, Alphonse Baudin, shot dead. The 20 deputies who had come to the barricade had met first at the Café des Peuples at No. 157.

A later use of No. 157 was made by the publication the Cooperation of Ideas there in 1899. It had then become the venue of the Theatre of the People

The cooperative connection was continued further down the road in No. 185. In the ealry 20th century ‘The Family of the 11th Arrondissement’ cooperative shop was also a bulk distribution centre for socialist cooperatives.

A symbol of anti-fascism and left unity

The huge garden-square-roundabout was originally called the Place du Trône. This name was given it from August 26 1660 when the young Sun King, Louis XIV, sat on a huge throne placed there at the entrance to Paris to receive oaths of allegiance from the Paris guilds after he arrived from the Franco-Spanish border having just married his 22-year-old double-cousin Marie-Thérèse of Austria and Spain.

After the Jacobin insurrection of August 10 1792 the square was renamed ‘The Square of the Overturned Throne’ (place du Trône-Renversé). Two years later on June 13 1794, three days after the passage of the Law of 22 Prairial, the guillotine was erected on the shadier south side of the square. From then until 9 thermidor an 2 (27 July 1794) and the overthrow of Robespierre, an average of 30 people a day were executed there.

At the restorations of 1814 and 1815 the square’s name became again the Place du Trône.

On July 14 1880, at the same moment that the Third Republic determined that inscription Liberté, Égalité, Fraternité was made obligatory on all French public buildings, the square was given its current name.

Nine years later, on the one hundreth anniversary of the storming of the Bastille, the sculpture The Triumph of the Republic put in the centre of the Place.

This was a large piece by the Communard Jules Dalou, who had returned from exile in 1879 and who had originally designed it for a competition to place a republican statue in the Place de la République. Dalou also sculpted the tombs of Victor Noir and Auguste Blanqui in the Père Lachaise  cemetery.

A general strike supported by both the CGT and the CGTU in defence of the republic against the growing fascist threat was called on Monday February 12 1934. A Socialist column headed by Leon Blum and other Socialist deputies walked from Vincennes to la Place la Nation, with Dalou’s Republican statue its message. There the Socialist column was joined by an even larger Communist march creating a demonstration of 150,000 in Paris alone, while tens of thousands demonstrated elsewhere in France.

The Place de la Nation became a symbol of anti-fascism and left unity. So two huge contingents came together there on July 14 1936 to celebrate the Popular Front victory. This time the call came from 48 different organisations and delegations in traditional provincial as well as working clothes were present alongside each other. Tartakowsky (1997) estimated there were a million people on the streets of Paris for the occasion, marching from the Place de la Republique and Place de la Bastille to the Nation.

Communist and Socialist columns met at the Place de la Nation again to celebrate the first-ever French May Day public holiday on May 1 1937.

In 1938, with the end of the Popular Front government, the strike called on November 30 by the CGT against the dismantling of the 1936 labour laws saw demonstrators attacked by the police.

A young FTP-M.O.I. resistance group (Meier List, Marcel Rajman and Jaroch Klesczelski) threw a grenade at a group of German soldiers in the Place on December 12 1942.

On May 1 1951 the police attacked a May Day demonstration of Algerians who were carrying the MTLD independence movement’s flag. One hundred police were injured and 1,600 Algerians arrested.

On July 14 1953 the traditional march took place from the Place de la Republique to the Place de la Nation. Then the Algerian demonstrators behind the MTLD banners continued to where their lorry was parked to stack their placards.

At that point the Paris police opened fire on them: six Algerians and one French CGT worker were killed and 126 wounded. No inquiry was held into the police action.