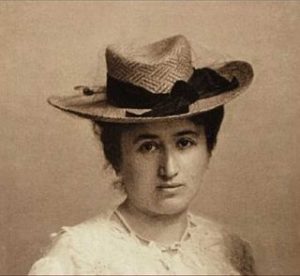 Rosa Luxemburg lived most of her 48 years a long way east of Paris, mainly in Warsaw and Berlin. But a new garden has been named after her in the 18th Arrondissement of Paris. The Rue Riquet garden is next to the railway lines leading into Paris’ Gare de L’Est. A few kids were playing in the Jardin Luxemburg when I walked round. Trains kept passing in the background.

The beautiful garden and play area opened in 2014, one hundred years after Luxemburg had spoken alongside the French socialist leader, Jean Jaurès, at a mass anti-war meeting in Brussels, on July 29 1914.

Just two days before Jaurès was murdered and a week before the First World War broke out. Luxemburg had travelled to Belgium as part of the last desperate efforts of the Second International to stop the war. With Karl Kautsky and Hugo Haase she represented Germany at that emergency meeting. Keir Hardie was there too, representing Britain.

In his last ever public speech, given at Brussels’ Cirque Royal, Jaurès congratulated the 100,000 Berlin workers who had demonstrated against war the day before. And he added: ‘You will allow me to especially pay tribute to the courageous woman, Rosa Luxemburg, who fans the flames of her ideals close to the heart of the German working class’.

Luxemburg had already spent a year in German prisons. She would return to Germany from Brussels to be jailed for most of the First World War.

She was born in Russian-controlled Poland in 1871. A big anti-Jewish pogrom took place in Warsaw in 1881, and this direct experience of anti-Semitism took the ten-year-old girl towards anti-racist internationalist politics.

At 16 she got involved with a small socialist group. At 18 she followed her brother and enrolled at Zurich University, where she met and fell in love with a Lithuanian student and already committed revolutionary socialist, Leo Jogiches.

Together they set up the Polish Kingdom Social Democratic party (SDKP) and after enrolling for a doctorate in Zurich, Luxemburg travelled to Paris to edit their new paper, Sprawa robot¬nicza (Workers’ Cause), whose first issue appeared in July 1893.

Luxemburg stayed initially near the Sacré Coeur in northern Paris. She lodged with another Polish revolutionary, Adolf Warszawski (murdered by Stalin in 1937), and his wife. On International Women’s Day, 2010, one of the few plaques to leftists in Paris commemorating her was erected at 21 rue Feutrier.

In 1895 Luxemburg moved to a third floor flat at 7, Avenue Reille in the 14th arrondissement, sharing with another revolutionary, Cezaryna Wanda Wojnarowska.

While editing Workers’ Cause, Luxemburg regularly used to research her thesis at the Polish Library on the Ile St Louis and the French National Library at the Palais Royal (as did Lenin 15 years later). Her doctorate on the Industrial development of Poland was accepted at Zurich University in 1897.

Luxemburg and Jogiches were political comrades and lovers for over half of their too short adult lives. But Luxemburg complained bitterly from Paris that all he ever wrote to her was about what she should put in the paper.

In one letter she wrote: ‘Dearest, I was so furious [with your last letter] that I wasn’t going to write again before I left [Paris]…. Your letters contain nothing, absolutely nothing that isn’t about Sprawa robot¬nicza … Not a word about anything new that has affected you personally…The only thing that unites us is the Cause and old shared feelings. I feel as little desire to come back to Zurich as I have to stay here…I’ve got masses of impressions and thoughts – but no-one to share them with! You?’

In 1898 she had a marriage of convenience with a German socialist to get German nationality and moved to Berlin. There, Jogiches finally joined her in 1900. Her intimate relationship with Jogiches ended in 1906 and during the next five years she had another lover, the son of Clara Zetkin.

In 1899 Luxemburg published ‘Social Reform or Revolution’, a critique of Eduard Bernstein. She criticised Lenin’s views on party organisation and advocated mass strikes rather than parliamentary activity.

Her growing political and theoretical influence in Germany, her public debates with Lenin about the centralized party and nationalism, and her criticisms of Bernstein made her a leading figure in the German Social Democratic Party (SPD).

These qualities, coupled with her speaking Yiddish, French, Polish, Russian and German, led her to become a member of the Second International Bureau in 1903. In 1905 her experience of the Russian Revolution led her to theorise the role of the mass strike as a way of transforming the working class from a reactive to a proactive historical force.

In 1912 a speech Luxemburg gave a speech on ‘Women’s Suffrage and Class Struggle’ at the Second German SDP women’s rally. She argued:

‘Women’s suffrage is the goal. But the mass movement to bring it about is not a job for women alone, but is a common class concern for women and men of the proletariat… the proletarian woman’s lack of political rights is a vile injustice.’

She ended her speech: ‘Fighting for women’s suffrage, we will also hasten the coming of the hour when the present society falls in ruins under the hammer strokes of the revolutionary proletariat.’ In 1918 she supported women’s sections being created within the Spartakus League.

After the German Social Democrats (as did the French Socialists and British Labour Party) voted war credits in August 1914, Luxemburg organised a group of resistors.

From jail Luxemburg continued to campaign against the war, and in 1917 created the Spartakus League as the far left of a new Independent SPD opposed to the war.

After the failed January 1919 Spartakus uprising that she had not encouraged but supported once it began, Luxemburg was arrested again.

On her way back to prison she was shot in the head by the officer commanding her guards. Her body was dumped in a canal and an army communique issued saying she had been killed by angry crowds. Karl Liebknecht was assassinated in the same way the same day.

Luxemburg’s presumed body was only finally recovered in May. By then, Jogiches, who had started asking questions about her murder, had also been arrested and then ‘shot will trying to escape’.

In winter it’s not always easy to find a red flower against a background of railway beams and shunter trains. But there was at least one in the Rosa Luxemburg garden when I walked through it.