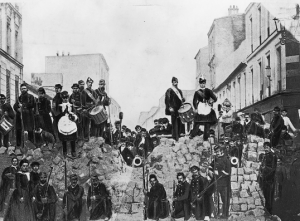 From setting an example and insurrections to state communism

Early French intra-communist debates were primarily around ‘How to achieve communism?’ Some 19th century French communists answered: By example and education. Some: By a revolution to destroy state power. And others: By seizing state power and using it.

The example of communism could lead others to follow. Society could be transformed by establishing ideal communities within the existing order. Utopian communist ideas and projects flourished during the first half of the 19th century. Many built upon egalitarian Christian beliefs to give them wider legitimacy, often looking to messianic figures to offer leadership.

Etienne Cabet (1788-1856) initiated the most influential of these experiments with his ‘Travel and Adventures of Lord William Carisdall in Icaria’, popularised in a French translation as Voyage en Icarie in 1840. It was Cabet whose pamphlet ‘Le crédo communiste’ first drew the word communist into the political vocabulary.

By the mid-1840s Icarian communist groups existed in several French cities as well as in Paris. After trials for conspiracy in 1847, Cabet argued his supporters should emigrate to Texas to establish communist communities:

The community suppresses egoism, individualism, privilege, domination, opulence, idleness and domesticity, transforming divided personal property into indivisible and social or common property. It modifies all commerce and industry. Therefore the establishment of the community is the greatest reform or revolution that humanity has ever attempted.

Other 19th century communists considered the revolutionary insurrection itself to be the principal way of preparing for a new society. It would overthrow private property and the state. Once the old power structures were removed the new world could be built by the working classes themselves.

Eric Hazan’s History of the Barricade begins by pointing out:

We could say that this is only a succession of defeats – some immediate, on the ground, others delayed – in which the forces of domination end up reversing the gains of an ephemeral victory. But thanks to Baudelaire, Blanqui, Hugo and Lissagaray, this is a history that is still living, a source of inspiration for those unresigned to the perpetuation of the existing order.

After the bloody suppression of the 1871 Commune the next Parisian barricades were only erected in 1944 and 1968, but the inspirational idea of a great event-led transition remained embedded in left French thought.

During the third quarter of the 19th century the barricade was gradually replaced by the General Strike as the hoped-for transformative event that would ensure the transition to a communist society.

The term ‘anarcho-communist’ covers those who held, like Pierre-Joseph Proudhon (1809-1865) and Victor Griffuelhes (1874-1922), that after the great event and the overthrow of the national government, the state and authority of the employers, the existing workers’ organisations would be able to democratically run society.

The third way of achieving communism borrowed from Babeuf and Robespierre in seeing the role of the state as key to achieving a new world.

Drawn to Babeuf’s ideas by Buonarroti, Auguste Blanqui (1805-1881) aimed to seize state power and use it to suppress the ruling elite. All the decisions on behalf of the Parisian workers and the French provinces should be taken by a handful of dedicated revolutionaries.

A proclamation was read on the steps of the Paris Town Hall on May 12 1839 in the names of the ‘Provisional Government’ including Blanqui (who was named ‘Commander-in-Chief’ of the republican army) and Armand Barbès (1809-1870).

Their self-constituted Provisional Government called for support from Parisian workers to:

‘Perish finally the exploitation, and may equality sit in triumph on the mingled ruins of royalty and aristocracy’.

On May 15 1848 in the aftermath of a protest march against the new government’s lack of support for the Polish revolution, Barbès announced a new government from the steps of the Town Hall. 15 men and were tried in July 1849. Barbès and Alexandre Martin /Albert (1815-1895) were sentenced to deportation, Blanqui to ten years and the republican scientist François-Vincent Raspail (1794-1878) to six. Louis Blanc (1811-1882) was acquitted.

The Blanquists wished to seize state power without any democratic mandate from the workers who they believed would then follow the revolutionary leadership.

In the third quarter of the 19th century the political meaning of ‘communist’ and ‘communism’ in France shifted to specifically highlight the need for the whole working class (and not a handful of conspirators) to capture and use state power to rule on behalf of their class and so ensure a transition to a better world.

Its first French translation appeared in Paris just before the June 1848 workers’ uprising. Yet hardly anyone read the Manifesto or knew it existed in Paris in 1848.

Although both Marx and Engels had already lived some time in Paris before 1848, the small influence they did have on the dominant Proudhonian anarcho-communism in France only began to appear from the late 1860s. Two of Marx’s daughters, Laura in 1868 and Jenny in 1873, married French socialists who had come to London to learn from Marx, Paul Lafargue (1842-1911) and Charles Longuet (1839-1903).

The next French version of the Communist Manifesto only appeared after the defeat of the Commune in 1872 in a New York-based French-language paper, Le Socialiste. Volume 1 of Capital was translated under Marx’s direction and published in Paris in 48 sections between 1872 and 1875.

Marx’s view of working-class rule involved rule of the whole class rather than of a few revolutionaries. Friedrich Engels specifically attacked the Blanquist understanding of ‘dictatorship’ in 1874:

Hal Draper’s Dictatorship of the Proletariat also quotes Marx in 1875 as arguing that:

‘Freedom consists in transforming the state from an organ set above society into one thoroughly subordinated to it’.

From the mid-1870s, after the return of the thousands of those deported and jailed after the Commune, Marx’s ideas, challenging both Blanquism and Proudhon, began to get a wider French audience.

Jules Guesde (1845-1922), the founder with Lafargue of the small Workers’ Party (Parti Ouvrier) sect in 1882, was introduced to Marxism in student discussions at the Café Soufflet on the corner of the rue des Écoles with the Boulevard St-Michel after returning from exile in 1876.

It was not long before Marx fell out with Guesde and Lafargue (as he did with many others). In response to their ‘revolutionary phrase-mongering’ he wrote: ‘What’s certain (if that is Marxism), is that I’m no Marxist’.

In the 1890s after 20 years of economic depression and rising inequalities, Marx’s ideas spread rapidly and widely on the French socialist left.

The founding of the French Section of the Workers’ International in 1905 to create the SFIO brought together France’s more rhetorically revolutionary groups like Guesde’s Parti Socialist de France and the more reformist groups and independent socialists such as Jaurès.

Within ten years, however, Jaurès had been assassinated by a pro-World War 1 French nationalist and Guesde was Minister without Portfolio in the National Unity (Union Sacré) Government.

Nearly the entire French ‘Marxist’ left supported the war effort arguing that aggressive German military imperialism was the biggest threat to French workers. Three days after Jaurès’ murder, Vaillant argued he was ‘For the Country, for the Republic and for the Revolution’.

Unlike several British and Russian socialists, on August 4 1914 every single French SFIO National Assembly deputy voted in favour of war credits. They included Marx’s grandson, Jean Longuet (1876-1938). And, unlike the situation in Germany, Russia and Britain, a government of National Unity (Union sacrée) was established the same day. Socialists and radicals were incorporated in the war effort from the very start.

Pierre Monatte (1881-1960) of the CGT’s La Vie Ouvrière monthly, Alphonse Merrheim of the metalworkers’ federation and Alfred Rosmer (1877-1964) met Leon Trotsky (1879-1940) in a left bookshop on the Quai de Jemmapes near the CGT’s offices to plan their anti-war campaign. This was soon after Trotsky was deported to France from Austria in November 1914.

In 1915 Merrheim attended the September 1915 Zimmerwald conference. With Lenin and 16 other delegates he signed the final compromise Manifesto drafted by Trotsky:

Workers of Europe… Since the outbreak of the war you have put your energies, your courage, your steadfastness at the service of the ruling classes. Now the task is to enter the lists for your own cause, for the sacred aims of Socialism, for the salvation of the oppressed nations and the enslaved classes, by means of the irreconcilable working-class struggle. It is the task and the duty of the Socialists of the belligerent countries to begin this struggle with all their power…

Never in the history of the world has there been a more urgent, a more noble, a more sublime task, the fulfilment of which must be our common work. No sacrifice is too great, no burden too heavy, to attain this end: the establishment of peace between the nations.

Working men and women! Mothers and fathers! Widows and orphans! Wounded and crippled! To all who are suffering from the war or in consequence of the war, we cry out over the frontiers, over the smoking battlefields, over the devastated cities and hamlets: “Workers of all countries unite”

This call fell largely on deaf ears in France where the pacifist opposition to World War 1 grew very slowly. The anti-war trade unionists linked up with Louise Saumoneau (1875-1950) and Hélène Brion (1882-1962) campaigning for working women’s rights.

Following the first 1917 Russian Revolution the Committee published a leaflet calling for support for a May Day strike and a Russian call to ‘The Proletarians of all countries’ to unite against the War.

Conscious of growing support for the Russian soviets, in December 1917 the CGT congress passed a resolution nearly unanimously that welcomed both President Wilson’s April decision that the US would enter the War as an ally, and the Russian Revolution.

The anti-war movement grew in 1917, but it was still a minority. In June 1918, when Gaston Monmousseau (1883-1960), a member of the CRRI, moved a motion at the CGT Railway workers’ conference denouncing the ‘union sacrée’ and calling for the ‘energetic pursuit of the class struggle’, he rallied just one third of the votes.

French communism, by 1917, was a very broad spectrum. It included the followers of Marx, of Proudhon, of Blanqui, and of the handful of revolutionary syndicalists who had opposed World War 1, as well as socialist pacifists, feminists, anarchists and anti-authoritarian writers and artists.

The only communist tendency that had disappeared since 1830 were the utopian communists.


Over the next 70 years French communism would be transformed. It would be reshaped and reorganised into a generally monolithic force driven largely by the consequences of the Bolshevik Revolution.