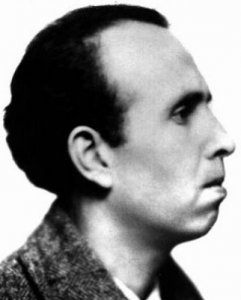 Pablo grew up in Greece, where he became a Trotskyist as a student in Athens, but was first jailed and then expelled in 1937 by the Metaxas dictatorship.  He came to Paris in 1938 and attended the founding conference of the Fourth International in Alfred Rosmer‘s house in Périgny in the Paris suburbs. During the German Occupation he was involved with attempts to organise among German soldiers with the publication Arbeiter und Soldat (Worker and Soldier) – this was extremely dangerous work and several of those involved were killed by the Germans.

One of those killed was Martin Monath (1912-1944) , a German Jew who had left Germany in 1938 for Belgium, where he worked with Ernest Mandel. In 1943 he was sent to Paris and once or twice a week he travelled to Brest to make contact with a small group of German soldiers. He was arrested, shot and left for dead in the Bois de Vincennes, but survived to be taken to hospital where the Gestapo captured him again and hanged him.

Another one of those undertaking this dangerous work, was Jean-René Chauvin (1918-2011). Arrested in Paris on February 15 1943, the French police passed him on to the Gestapo. Deported he survived Mauthausen, Auschwitz and Buchenwald. Throughout his life he kept his concentration camp number tattooed on his forearm. [Later he was a member of the Voix communiste, which gave active support to the Algerian FLN and then of the PSU and Ligue Communiste revoutionnaire].

In 1946 he was elected General Secretary of the Fourth International, based in Paris, where the PCI journal, ‘Workers’ Truth’ (La Vérité des travailleurs) was based at 64 Rue de Richelieu.  By the early 1950s he began to develop a distinctive political perspective. Believing that a Third World War was imminent, he argued that in this war the class struggle would acquire the new form of a conflict between blocs of states.  He therefore argued that Trotskyists must enter the mass working‑class parties in order to intervene in the new situation.

But entering the French Communist Party, with its tight organisation and a phobia of Trotskyists, was not easy – only seven Trotskyists succeeded. One of those who did, from 1953, was Denis Berger (1932-2013). He was later the founder in 1958 of the review called ‘The Communist Path’ (La Voie communiste) and also organiser of the escape on February 25 1961 from the Roquette prison of five women members of the Jeanson Network from ten year prison sentences for supporting the FLN.

There was also an international split in the Fourth International, with James P Cannon in the USA and Gerry Healy in Britain denouncing Pablo for abandoning the building of revolutionary organisation. The word “Pabloism” became a term of abuse for some political currents.

But Pablo was also very much aware of the significance of revolutionary movements in the so-called “Third World”. He was one of the first to make contact with the Algerian National Liberation Front (FLN) and began to organise solidarity action (the so-called “suitcase carriers” who assisted the FLN with publications and transferring funds.

One of the ‘bag carriers’ was Jakob Moneta (1914-2012), who was a Trotskyist employed as the trade union representative at the West German embassy at 28 Rue Marbeau. He used his ‘diplomatic bag’ to transport documents for the FLN.

Pablo was personally involved with two more ambitious ventures – setting up an arms factory in Morocco where Trotskyist engineering workers from France and elsewhere worked, and a project for forging currency; for the latter he was arrested and jailed in the Netherlands in 1960.

After Algerian independence in 1962 Pablo became an adviser to Ben Bella until his being overthrown in 1965.

Subsequently he only visited Paris briefly. He was marginalised from the Fourth International which he left in order to build his own tendency; he travelled widely before returning to his native Greece, where he advised Andreas Papandreou.