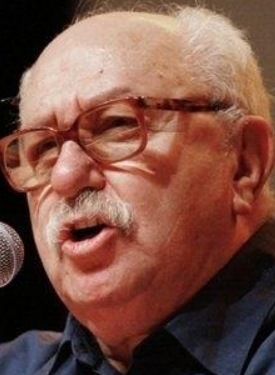 One of the few leaders of the fragmented French Trotskyist left to actually put themselves up for an electoral test, in 1988 Lambert stood in the Presidential elections for a ‘Movement for a Labour Party’ and did miserably (116,823 votes).

In 1992 he founded the Parti des Travailleurs (Labour/Workers’ Party) that dissolved itself into the Parti ouvrier indépendant (Independent workers’ party) in 2008.

Arguably, one of his main legacies was the fact that a former member, Lionel Jospin, was prime minister in a cohabitation government with the corrupt President Jacques Chirac from 1997 to 2002, and that several leading trade unionists from the anti-Communist Force ouvrière trade union confederation acknowledged his influence.

Of Russian Jewish parentage Pierre Boussel joined the Communist Youth at the age of fourteen and became a Trotskyist soon afterwards when he failed to understand how the PCF could abandon its anti-militarist positions after the Soviet Union signed the Franco-Soviet treaty of mutual assistance in May 1935.

Some of the tiny numbers of Trotskyists and their sympathisers like Lambert decided to join Maurice Pivert‘s ‘Revolutionary Left’ tendency from 1935 and then the PSOP, the breakaway Parti socialiste ouvrier et paysan (Socialist workers and peasants party). This was set up in 1938 and had around 8-10,000 members.

It was here that Lambert met Pierre Frank and Raymond Molinier (whose membership the PSOP refused). In December 1938 he joined their tiny group first established in March 1936, the Parti communiste internationaliste.

The PSOP, however, decided quickly to expel those like Lambert who attended a meeting of ‘friends’ of the ‘Truth’ newspaper on May 30 1939. This had taken place at the Auger restaurant in the Brasserie du Commerce at No. 48, Rue des Archives, and the expulsions by the PSOP took place a few days later, on June 3 1939.

During the German Occupation Lambert worked clandestinely with the otherTrotskyists in the small circle. On February 15 1940 he was arrested and convicted of threatening the security of the state with a three-year jail sentence. He was being transferred during the collapse of the French army in May 1940 and was able to escape and reestablish clandestine contacts in Paris.

While working to rebuild the CGT under the Occupation, as early as October 1943 he argued for the unification of the divided French Trotskyist groups.

After the war Lambert became part of the leadership of the Parti Communiste Internationaliste (PCI producing the journal ‘Truth’ (La Vérité ) from 46, Rue de l’Arbre Sec.

In 1952 the PCI split. Lambert led the faction that opposed Pablo‘s strategy of entry into the Communist Party and insisted on maintaining an open revolutionary organisation.

Within the Fourth International  Lambert was aligned with James P Cannon in the USA and Gerry Healy in Britain, though he later broke with both. Over the years his organisation had several names, but the group was generally known by his name as the “Lambertistes”.

During the Algerian war the Lambertistes supported the Mouvement National Algérien of Messali Hadj, the bitter rivals of the FLN, who fought a savage war with their fellow nationalists, leaving some four thousand dead on French soil.

On 16 January 1955 Lambert and Piveau organised a meeting demanding the release of Hadj at No. 8 Rue Danton, in the meeting room of the ‘Knowledge Societies’ (Hôtel des sociétés savantes). This led to very bitter relations with the other French Trotskyists, who supported the FLN.

In 1968 it was a member of the Lambertist organisation, Yvon Rocton [1938-2008], who led the very first strike and occupation at Sud-Aviation in Nantes. That sparked off the wave of workplace occupations eventually involving ten million workers.

In 1988 Lambert stood in the presidential election, but obtained only 0.38% of the vote.

Lambert’s insistence on the importance of the history of the movement perhaps explains why a number of France’s most important left-wing historians have been members of his organisation – Pierre Broué [1926-2005], a specialist in the history of communism, Jean-Jacques Marie [b 1937], a biographer of Stalin, Lenin and Trotsky, Benjamin Stora [b. 1950], expert on the Algerian war, and Jean Marc Schiappa [b. 1956], an authority on Babeuf and Buonarroti.